It’s been a great time to be a beer lover in Winnipeg and Manitoba once again. We’ve had Surly come out with their incredibly delicious Imperial stout, Darkness (write-up soon), Stone Angel is ramping up and releasing new beers including a smokey autumn ale called a Samhain. This past weekend saw the official opening of Trans Canada Brewing (regular hours Wed-Sunday 4-11pm) and the anniversary party for PEG Beer Co.

I had the chance to sit down and talk with Colin Enquist, Sales and Marketing Manager for PEG and one of the hosts for the podcast “Pub Chat”, about PEG’s first year. Colin describes it as being a really busy first year. I think this is an understatement given the amount of beer that PEG has produced. They’ve been relishing in the opportunity to introduce a lot of people to craft beer. Given their location, they’ve become a hotspot for theatre and concert goers. Located right in the midst of the Manitoba Theatre Company, the Orchestra and Ballet hall, and the Tom Hendry Warehouse, they’ve become a go to for pre- and post-event drinks.

There were some matters beyond their control that did provide for some annoyance. There was a significant amount of construction happening during PEG’s first year. This caused numerous disruptions, reduced foot and car traffic, and a loss of parking. The construction is complete and has provided a beautiful new field house for the Sport Manitoba building as well as a parkade which is accessible after 5pm. 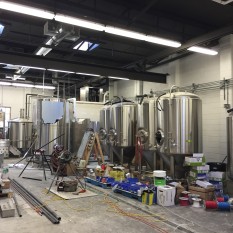 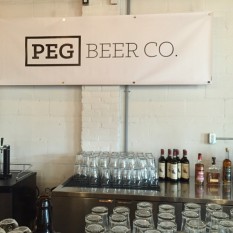 PEG also opened their restaurant before having their brewery ready to brew. This allowed for them to get the food and kitchen staff trained on the restaurant side before introducing them to the beers. Overall this initial delay, while annoying, worked out for the best. It resulted in a better trained staff and gave the leadership team an opportunity to work on the floor with customers.

I also asked both Colin and owner Nicole Barry whether there is anything they would change looking back on their first year. Both had pretty much the same response. There are always things that could have been done differently in hindsight. That said, they both believe that things worked out the way they needed to. They could respond to the bumps in the road and they came out on the other side better for it. I guess, in a sense, they wouldn’t do anything differently.

As far as the future, PEG is looking to expand by adding more tanks to the brewery and working to make their beer more available. To do so they are looking at packaging options. There haven’t been any decisions made as to whether they package in Cans or in Bottles, however those discussions are happening. There will be new beers and old favorites (like Iron Horse Russian Imperial Stout) coming back and continuing to connect with community through hosting events such as Shakespeare in the Pub via Bravura theatre company, trivia nights, and a variety of other community events.

PEG continues to be a space in the exchange where you can go have a good beer, a good bite to eat, and enjoy. I am looking forward to what PEG has to offer moving forward.

If you want to learn more about who brews the beer at PEG, check out my write-up with head brewer Jeff Wiebe here.

Thanks for following along.