Remember how I’ve been talking about all these new breweries and how they are going to be opening soon and we will be able to, finally, see our craft beer community grow? Well, we are getting REALLY close to that time.

This past week I had the chance to stop into Peg Beer Company and take a look at the progress they’ve made. While it’s still a work in progress, things are getting really close to completion.  You’ll need to imagine a little bit as there is a lot of construction material still in the space, but man, it’s exciting. 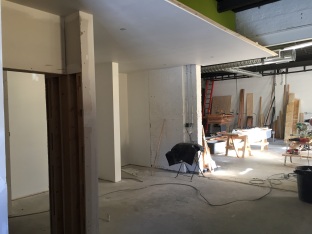 Pictures from 20th of February – Lots has been done since.

Nicole said that they hope to be open by March 14th.  This will be a soft opening given that they won’t have any of their own beer brewed yet. Instead, they will have special beers on tap at the pub from other breweries. Hopefully some fun stuff.

As many of you know, Peg has already announced the beers they plan to launch with. These include a Berliner Weisse, Stout, ISA, Saison and a Kettle Sour. Nicole says that they will certainly have some more beers coming down the pipe but that she can’t spoil the surprise. Though I imagine we will see an Imperial Stout and given one of the brew team, Scott Sawatzky, loves sours, we will likely see more of those. Apparently he makes a mean Black Berliner Weisse. 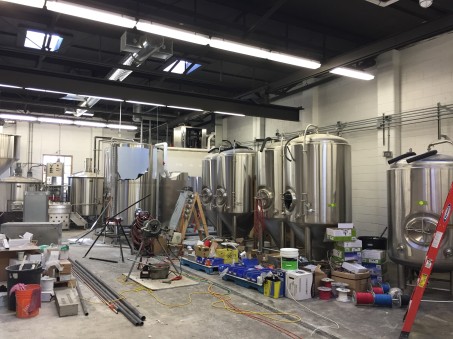 To begin Nicole says they will be packaging two different beers and trying to make sure they leave room in their brew house for creativity. She wants to see specialty beers and one-offs as well as rotating taps in the pub side.  She’s put together a team of brewers with their different expertise and she will be drawing on them a lot. The team is made up of the aforementioned Scott Sawatzky, Jeff Weibe, Dan Simpson and Kevin Rempel. All of them were at the brewery working hard to get things ready to go. I think I may need to hire them; I’ve got some drywall I’d like to fix up in my house.  One thing Nicole mentioned about the work the guys have been doing is the love they put into it. They are spending time making sure the corners on the drywall is perfect and really taking to heart the task of building a brewpub. 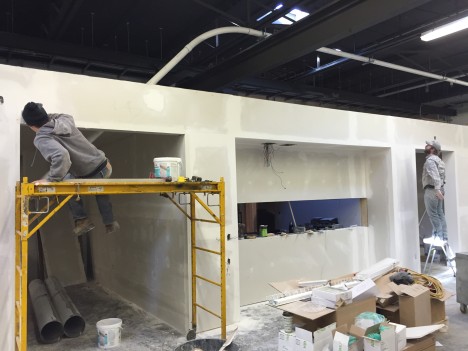 Nicole echoed the sentiment we heard from Torque last week, that when people come into the brewpub she wants them to feel the love the employees have for what they do and have that spill over into their experience.  With the brewing community continuing to grow Nicole really wants to see that comradery that she sees in other jurisdictions. Places like Toronto where brew masters from places like Amsterdam, Steam Whistle, and other breweries who come together to just brew for fun at a little homebrew club. Having a close knit community in which the breweries work together and promote one another. Something I really am hoping to see. Collaboration pack anyone?

Nicole has also run into some of the same issues as Torque. The communication between the province and the city, who issues the permits, has resulted in delays across the board. This is the third time Nicole has acted as a General Contractor for a Brewery and there are certainly some hiccups that arise along the way. Nicole is positive about it all and working with the inspectors and permit department to get things moving forward. Still, I think it is important that if we want to have breweries open we don’t put up roadblocks. Communication between Provincial and Municipal governments to clarify rules would likely go a long way.

Nicole also told me that they have just brought Shannon Burns, formerly from Diversity, on as the Assistant Manager for Front of House. Shannon will also have a big focus on special events. With her background in catering from diversity she is a good addition to the Peg team. Not only that, Nicole said that she wants to have a big focus on special events. Without giving too much away she said that she wants to give people more reasons to come to the exchange and try to work with the already existing local business in the exchange to do some fun stuff.

At the end of the day, Nicole told me that this has been a really creative project. After all: “Food and Beer are huge creative outlets.” I for one am excited to see what she cooks up. I know I’ll be doing my best to support the craft beer industry in Manitoba, one beer at a time.