It’s been a little while since I’ve had a chance to post a new entry and I’m happy to be back at it. This past week I had a chance to sit down with Matt Wolff, Adam Olson and John Heim from Torque Brewing and get an update on how things are going.  Since the last time I spoke with them there have been some changes and a whole lot of progression forward.  They are getting closer and closer to opening and so it was good to catch up and hear all the news.

The team behind Torque is a quite a solid one. I got to spend a lot of time chatting with Adam, Matt and John so I can give some more details on what they bring to the team, but the other two members whom I have not had the pleasure of meeting, are: Phil Bernadin, a home brewer and mechanical engineer and Gilles Pinette, an entrepreneur and Torque’s VP of Business affairs.

Matt brings 15 years of commercial brewing experience to the Torque team. Having the knowledge and skill to run the plant and the day to day operations allows for Torque to hit the ground running.  He is anticipating being able to have a similar output to Fort Garry and is excited about the ability to ramp up their brew house and expand in the future as need be.

Adam Olson has only been home brewing for 3 years but in that time he has developed a name for himself and his award winning recipes. He came 5th overall in the brewer of the year competition and is excited to have Matt take these recipes and ramp them up to full brew scale.  As a microbiologist by trade he has a good understanding of yeast strains and is really excited to use this knowledge to start a sour program at Torque. He wants to experiment with barrel souring and wild strains.  Adam is also taking his CPA, as he will be the secretary treasurer for Torque.

John Heim is the vision man. He has the overall picture of where Torque is moving and the skill to help direct it to where the team wants it to go. With his PR expertise and sales background he is already ramping up excitement and anticipation for Torque. They have a full line of merchandise that they will be getting up on their website for sale soon and he has been working with restaurants already to help build that anticipation and is doing all the right social media things.

Even with such a strong team behind Torque Brewing, they still have a lot of work to do. They are still a few months away from having beer and are just in the process of outfitting their space with equipment and getting the test-batch system ready to go. While John didn’t want to confirm any specific beers, other than a Helles (German Lager), the team has a diverse range of beer preferences. Matt likes darker, heavier beers with good maltiness, Adam likes the oft overlooked styles like Dopplebocks, Wee Heavies and of course Sours, and John is liking heavier gravity beers like Russian Imperial Stouts and Barley wines. While this doesn’t tell us much more of the specific beers we can expect, it gives us an idea. John did say that we can expect the Helles, a higher gravity beer like a Barley Wine and of course some Sours.

So, one question I always like to get the answer to is “Why open a brewery?” It’s not an easy task, it costs a lot of money, and there is no guarantee that you’ll ever make any of it back.  Matt saw this a progression. He wanted to evolve. Matt doesn’t like being idle, he wants to keep working on beers and making them better and better. Being the VP of Brewery operations at Torque will give him the opportunity to direct the way the beer production goes, to always be striving to be better and to have more control over the creative aspects of the beers.  For Adam, it was a seed planted in a conversation that he thought about, talked about, and then took the leap. Most homebrewers have a dream to one day take their hobby to the next level, Adam just happened to get that chance. 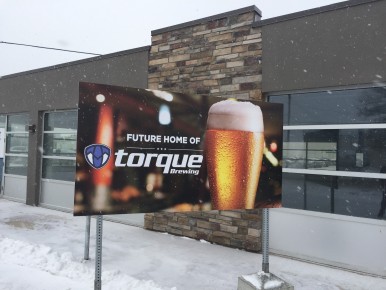 Torque will be located at 330-830 King Edward and with Half Pints and Barn Hammer makes a little bit of a beer triangle. They were looking for a place that was as logistically accessible as possible. With plans to put out 1 million litres of beer in year one, they needed a place that could get trucks in and out to take the beer where it needs to go. They were also looking for a high traffic space with a blank slate that would allow them to develop the brewery for their needs. The location they chose gives them all of this as well as the added advantage to being near the airport and a lot of different hotels.

So, 1 million litres of beer, that’s a lot. What they heck are they going to brew this on? Well, they have ordered a 2 vessel 30 HL brewing system that is capable of expanding to a 4 vessel system.  They’ve got mods on it that will allow for step mashing, concoction mashing as well as straight infusion. They’ve got Hot and Cold liquor support and best of all, the system is 100% Canadian made.  John told me that for Torque their motto is “whenever possible source local, then Canadian, and then US.” That’s an exciting notion and I’m looking forward to seeing it. 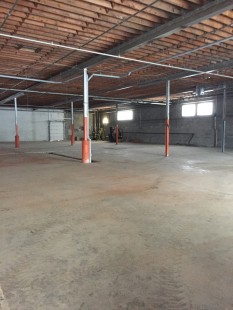 So, how do we get the beer? They are planning to be canning right off the hop. They are going to be doing 6 and 12 packs in 355ml cans, single 473ml cans, 4 packs in 473ml cans and then for the special occasion beers, 650ml bomber bottles.  As well, they are going to have a rather spacious tap room with growler fills. This is secondary at this point in time as they really want to focus on getting the brewery up and running. They’ve got a good ways to go but they are excited about starting.

The team at Torque wants to be the dominate craft brewer. They would like to be the Surly or Beau’s of Winnipeg. Not just through the production of great beer but as through all their actions. They want to be a respected part of the community and represent how great Winnipeg. They want people to feel their passion for craft beer from the moment they step foot in the brewery and the moment they taste their beer. They want to promote education about craft beer through Torque TV, a series of YouTube videos to help educate the public on various aspects of craft beer, by offering brewing courses and tours, and by generally being open and available to answer questions.  They want to have a team of employees who can be proud of the work that they do. The passion is really there when you talk to these guys. You can tell how excited they are.

Right now they are working with the Architects and Engineers to get the space ready. With the weight of their tanks they need to do some work on the flooring. With 6000L of beer plus the weight of the tank, you need a strong floor.  Once this is done they want to get brewing. Their hope is to have beer ready by the May long weekend as they would like to be able to participate in Flatlanders. The plan after that is to have a soft-opening to get the beer out the door and then start working on finalizing the tap room. As they grow they want to make sure they have beer for every palate and work on eating into the macro share of the market, then to expand to being at festivals, supporting beer gardens and taking an overall multipronged approach.

Since we have so many new breweries working on opening up I am always curious how the changes in legislation have impacted the breweries. What I am learning is that while the province is on board with making things like taprooms legal, they aren’t the ones who issues the permits. The City of Winnipeg and the Province aren’t on the same page as to what a taproom actually is. What rules need to be followed? What needs to be in place?  Having all these ideas and being told that “you can’t do that” has become a bit of a challenge.  As the market grows and the rules begin to get flushed out, it will become easier for breweries to open. John said that now when they call the permit department it’s a lot faster because they’ve been dealing with similar situations.

To finish, I want to give you all an idea of how Torque sees itself differentiating from the other breweries that are opening in the Province.  First and foremost, the sheer scale of the brewery will set them apart. They plan to have a massive scale equal to Fort Garry and be able to supply good quality beer. They also hope that the culture of the brewery and people first approach will help set them apart. They want people to feel like it is a family where everyone loves their job and the people who come into the space are met with this passion and love for craft beer.  Finally, they want to be a source of partnerships and work with likeminded companies through collaborations with other breweries and local businesses. Overall, the team at Torque are all raving fans of beer.