It’s been awhile since I had the opportunity to sit down and write. As those of you who follow me on Twitter know, I’ve been travelling for the past 4 weeks. While I certainly had a fantastic trip – enjoying a variety of interesting and fantastic beers – I felt a bit disconnected from what was happening back in Winnipeg.  While I still have breweries from back east to write about in my “second dispatch” I want to write about some of what happened in the ‘Peg while I was away.

One of the most exciting things involves the guys from Torque. Over a year ago when I first sat down with these guys I was excited, curious and a hesitant about their plan. They wanted to be big, and can right from the get go. I thought this was ambitious and wasn’t sure if they would be able to do it. I should never have doubted! Not only has this team hit their production mark, but they’ve done it while producing some really fantastic beers.

You can get Diesel Fitter American Stout, Witty Belgian Wit, and Red Line IPA at a variety of places around town including King’s Head, Barley Brothers, and The Common at The Forks to name a few. The only place you can get their beer to take home is the Quality Inn Craft Beer Market  who have Torque’s, as well as other local beers, available on growler/howler and in cans. They are the first place in the city to have Torque’s cans in stock. This place has made a name for itself as one of the best spots for craft beer in the city. Along with Barn Hammer, Fort Garry and Half Pints, we can now add Torque to the list of local breweries pumping out beer.

Speaking of which, the second piece of exciting news is that Peg Beer Company has all of its permits and is working on producing this week. According to their Twitter account, 100% this week. I’m pretty excited about that and I’m anxiously awaiting a chance to try their beers.  With Le Burger Week underway, now is the best time to get out to places around the city and try some of this new local beer while enjoying some fantastic eats.

One Great City continues to progress forward and have started on the renovation work in their space. This will be a lot of hard work for the folks behind OGC, but with the posts they’ve been putting on twitter, they seem up for it. With an initial hope of being open in October, I’ll be working to follow up with them again soon.

Brazen Hall continues to progress forward. They’ve got a nice big sign up in front of their space on Pembina and the count-down on the website continues to tick downwards. They also hope to being opening in October and so I’ll be following up with them again soon as well.

Finally, as I’ve mentioned before Beau’s All Natural is distributing cross Canada and it seems like we may be seeing a few more beers arriving in Manitoba before too long.  With Tom Green coming to perform at Rumors Comedy Club from September 22-24, it seems he might be bringing some beer with him.  I’ve heard The Tom Green Beer (Milk Stout) will be the next to show up in Manitoba with their Oktoberfest Mix Pack next on the list.  Watch the Liquor Marts website and Twitter to see when they arrive.  As well, watch this site for some write-ups about the beers as I try them.

It’s an exciting time in Manitoba right now with a number of other breweries on their way to opening. I’ll be meeting with Trans Canada brewing soon, I hope, and following up with Little Brown Jug.  Follow me on Twitter and follow the blog for updates.

I’ve been away from Winnipeg for just over a week now and already it’s been a fantastic trip. I went down through Vermont, got me some Heady Topper and other great beers. Then it was down to Boston with my Dad for his 65th birthday where we saw James Taylor and Jackson Browne live in concert. We drove back up to Canada through Portland, passed through Nova Scotia and are now back in Fredericton. It was a whirlwind, but a good one.

I’ve been doing my best while here in Fredericton to visit some of the breweries that have opened since I was here two years ago. The craft beer scene in New Brunswick has exploded with breweries popping up all over the place. This province of 750,000 people has 25 breweries and more on the way! While I won’t get to visit all of them, here is part one of my NB Breweries Dispatch.

Graystone is the most recent addition to the craft beer landscape in NB.  It opened this Canada Day and has been working hard to make beer since. While they have not received their equipment – they’re using gear at two other local breweries for the time being – they will have a 10 barrel system when it finally arrives.

The name for the brewery comes from the owner. His wife’s last name is Gray.  The stone part comes from his “lightbulb moment” for the brewery. The owner, Wes Ward, and a friend were in Patagonia hiking when they came up with the idea for the brewery.  They want all the names of the beer to reflect this origin, including the three beers they’re currently brewing (though I only got to try two): Devil’s Peak Black IPA, Basecamp ISA and their flagship Patagonia Pale Ale.  They have been incredibly successful with their beers since opening, selling 300 L of the pale ale in one day.

One of the unique things about Graystone is they are the only place in NB doing crowlers.  I love the crowler because of its ability to stay fresh longer and be easier to transport.  Of course the downside is you have to drink it all in one sitting… wait, is that a downside? 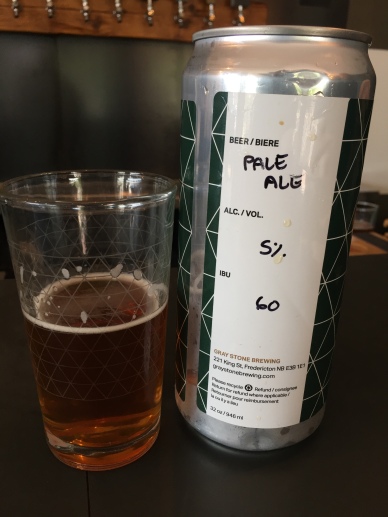 The brewery also sells a variety of other local craft beers in flight and pint form. They are unable to sell any beer besides their own in crowler or growler but they have about 18 on tap.  If you are in Fredericton, it’s a great place to go and try out some different brews. It’s also a baby friendly brewery with change tables in each bathroom, so no excuses not to visit.

Recently, there was a story in the local paper that Gray Stone had been contacted by Greg Koch from Stone Brewing about the name.  They are now in the process of changing from Gray Stone to Graystone.  While this certainly isn’t a simple task, Wes was impressed with Greg for calling and working through it with him rather than just sending the lawyers. The process has begun but will take some time. 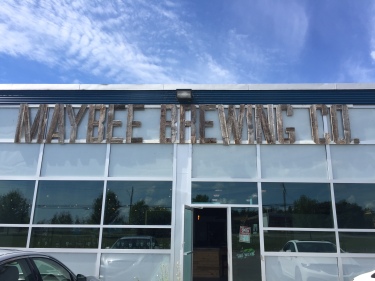 Maybee Brewing Company opened in February of 2016 for growler sales only and then opened up their tap room and canning line in June. This brewery is named after the owners, Paul and Mikey Maybee, and produces a variety of beers, from their pale ale to a Brett Red.

They currently employ two brewers with a third joining shortly. Paul is the head brewer and had been homebrewing for nine years before opening Maybee.  He was in the same homebrew club as some of the other owners of breweries in the city and they all got the idea to start breweries around the same time. 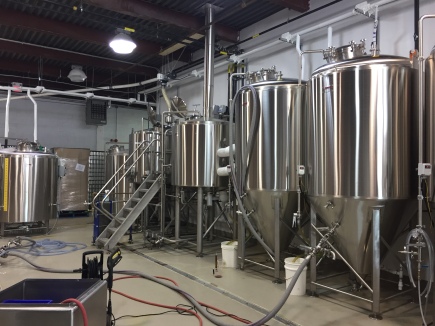 Maybee runs a 10 barrel system with three 20 barrel fermenters and a 20 barrel bright tank.  They sell in cans, growlers and flagons (1L swing-top bottles) and you can get flights at their tap room. They only sell their own beer at the tap room.

They currently brew six beer varieties: Belgian Tripel, Birdseye Pale Ale, Elevensies Espresso Stout, Roseway Red, Workhorse IPA and Brett Red. You can get all of these beers, except the Brett Red, in cans at the liquor stores in NB, though you can get the Brett Red in a 750ml corked bottle.

I chose to visit them
But if your travel plan’s crazy
Just visit a liquor store
And grab some… Maybee.

When I was last in NB two years ago, Trailway had just started selling beer from the owners’ basement to pubs around the city. They spent their first two years as a brewery operating in this manner and only recently (June, 2016) moved to their location on Fredericton’s north side.

With a 10 barrel system and four 10 barrel fermenters they currently do two brews a week.  They are looking to get three 30 barrel fermenters in the fall and plan to start canning and producing more beers at that point. Currently you can only get their beer at their taproom.

Owner Jake Saunders told me they are looking to take a Maine/Vermont approach and only do limited canning with a schedule that’ll keep the product as fresh as possible.  With their focus being on hazy, American-style ales – and wanting to focus on the juicy hops for their beer –  freshness is of key importance. They want to be flexible as well and so will have a three day schedule with some of the beer being sent to liquor stores around the province.

The brewery is co-owned by Jake, a chartered accountant, and Dan Mason, an engineer. Dan does most of the brewing while Jake focuses on the business side of the brewery. Both are solid brewers and Jake is, in fact, the President of the New Brunswick Craft Brewers Association.

As I said, Trailway’s focus is hoppy beers. They really love the Australian hops and use a lot of Topaz and Galaxy. They also love mosaic and citra (in small amounts). They do have a couple of stouts as well; a coffee and an oatmeal stout, and Jake told me they like the two extremes.  They don’t really like sweetness in beers so they go for really hoppy ales or dry stouts. They also have a Raspberry Wheat Ale in production for the summer but will likely move it to the wayside when they start canning. 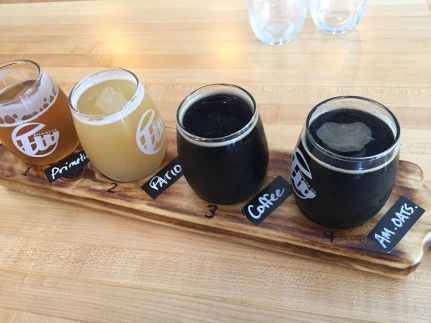 I chatted with Jake for about an hour and can say he certainly knows his beer and has a really good mindset for brewing. The beers were all solid and they have some other ideas for beers down the line. Jake really loves sour beers as well and said they are looking to start doing some when they get their new fermenters. Interestingly, the first one will likely be a hoppy Berliner Weisse.

The brewery is a little hard to see from the road, but throw it into your favourite map app and you’ll find it. They have a nice taproom and lots of space. It’s another stop well worth the visit.

I still have some breweries I’d like to visit around Fredericton, then PEI when I get there. I’ll look to do another post on these breweries next week while I enjoy sand and sun (and lobster) in PEI.

As always, thank you for following along and I hope if you get a chance to come to the East Coast, you’ll make a point to visit breweries along the way.