Sometimes I feel pretty lucky doing what I do. I had the opportunity to try out the Best of Beau’s pack a little bit early so that I could spend some time tasting and writing about the pack. This pack is already listed on the MB Liquormarts website and I’m hoping that this write-up of the four beers contained within will prove helpful to you. Overall the pack presents some diversity of styles with some interesting twists.

I did a pretty in-depth write up about Beau’s when I met with co-founder Steve Beauchesne, but I do want to reiterate a bit about the brewery. Founded in 2006 in Vanleek Hill, Ontario by father and son Tim and Steve Beauchesne, Beau’s is an employee-owned and completely independent Canadian craft brewery. Led by head brewer Matt O’Hara, the focus at Beau’s is to brew interesting and tasty beers using only quality, certified-organic ingredients and local spring water. While not the only completely organic brewery in Canada, they certainly have made a name for themselves with their business practices: they’ve won over 85 awards for their brewing, packaging design and business practices. This includes two gold medals at Mondial de la Biere (Strasbourg, France, and Montreal Quebec); six gold medals at the Canadian brewing awards, seven times “Best Craft Brewery in Ontario” and seven times “Best Regularly Produced Beer in Ontario” at the Golden Tap Awards.

Dark Helmut is a beer brewed in the style of a Schwarzbier, a German dark lager that literally translates to “Dark Beer”. The “imperious” nature of it both plays on the Dark Helmut (reminiscent of both Darth Vader and Lord Helmet) as well as the fact that the ABV on this beer comes in at 7.3%.

Schwarzbiers are typically a balanced beer. Presenting both a smooth roasted malt characteristic along with a moderate hoppy bitterness. Lighter in body and lacking the deeper roasted malt and heavy aftertaste make Schwarzbiers easy to drink.

While the history on this style is fairly sketchy, it is a regional specialty of Thuringia, Saxony and Franconia in Germany. Popularity for this beer came back after German unification and it served as an inspiration for Japanese brewed black lagers.

ABV – 7.3%
Appearance – Pours charcoal with a thin quick fading off-white head.
Smell – Smells of caramel and toffee, dark fruit and roasted malt
Taste – Bitter roasted malt notes along with sweet malt and caramel. Lingering bitter slightly astringent after taste.
Mouth Feel – Soft carbonation with a dry bitter finish.
Overall Thoughts – A very nice well-balanced beer that has a bit more flavour from the extra malt used to make this imperious(imperial).
Do I like it? – I found this beer to be quite tasty. It wasn’t too rich or filling but still carried a nice malt and hop balance. Easy to drink and flavourful.

Bush-fire is brewed using a blonde ale as a base with the addition of rooibos and honeybush teas. Blonde ales are traditional malt oriented with interesting hop or floral flavours and aromas. Light bodied, easy to drink and refreshing, these beers typically don’t overwhelm the senses with flavour. They are typically well-balanced and clean on the finish.

Typically, this style of beer is brewed as an alternative to a lager, which requires a period of lagering making it a more time consuming beer to produce. This particular blonde ale from Beau’s certainly contains a punch of both aroma and flavour that is clean on the finish and very satisfying to drink.

ABV – 5.8%
Appearance –  Pours amber with a short lived thin white head.
Smell – Smells of Honey right upfront with hints of southern sweet tea, and rooibos
Taste – Nice sweetness reminiscent of honey with a dry tannic bitterness on finish from the tea. Not overpowering by any stretch but flavourful and enjoyable. Rooibos and honey bush bring really nice flavours to this blonde ale
Mouth Feel –  Medium carbonation, light mouthfeel with a lingering dry finish.
Overall Thoughts – Overall quite a good beer. Teas bring a very good balance and depth to the blonde ale base. Honey sweetness and dry finish make for an enjoyable drink.
Do I like it? – While I tend to find blonde ales not to be up my alley, this one had nice flavours to it that added quite a bit to the easy drinking blonde ale base. So, yes, I did like it. 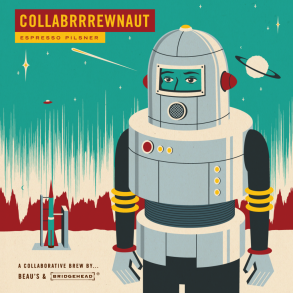 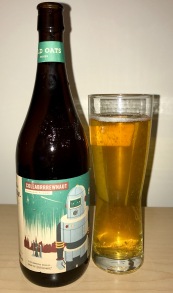 Collabrrrewnaut is a really interesting blend of a Bohemian-style pilsner base and cold brewed organic fair trade coffee.  Done as a collaboration between Beau’s and Ottawa’s Bridgehead Roastery, this beer brings some really interesting flavours to an already delicious style of beer.

Pilsners are one of the most popular beer styles in the word and originate in the City of Pilzen in 1295.  While Pilsners are considered to be bottom-fermented beers now, they were actually top-fermented until about the mid-1840s.  The taste and standards of this older styles varied widely and in many cases entire barrels of beer were dumped out.  In 1839 the city of Pilsen founded a city owned brewery (now Pilsner Urquell) which was to brew beers and pioneer the Bavarian style.  Brewers had already begun to brew using bottom-fermenting yeasts that were fermented and stored in colder temperatures to be drunk later. This is where the term lager comes from. Lagern is the German word for storing and comes from this process.

Using Pilzen’s soft water, local saaz hops and this Bavarian style of lagering produced a clear, crisp and refreshing beer that became the standard for the style.  With the introduction of modern refrigeration there was no need to use caves for beer storage and this enabled the brewing of bottom-fermenting beers in many new places.

ABV – 5%
Appearance –  Pours a straw colour with an effervescent white head.
Smell – Smells of slight herb and spice and a subtle espresso note.
Taste – Deceptive. While it has a very subtle bitterness and a clean dry finish it contains interesting depth of notes from coffee to subtle fig and hints of chocolate.
Mouth Feel –  Medium body, medium carbonation with a lingering dry finish.
Overall Thoughts – While I tend to characterize pilsners as having a bit of a “bite” to them on the finish, this beer finishes clean. The really interesting flavours brought in by the use of coffee provide a variety of flavours that don’t typically crop up in pilsners.
Do I like it? – This beer was deceptively good. The initial pour is light in colour and gets the mind ready for a lighter crisp clean beer. While this beer certainly had a clean dry finish, the flavour profile was really interesting. I rather enjoyed drinking this beer and trying to pick out the different components. The coffee used definitely added.

Quads and Rockers is a Belgian strong ale that has been brewed with a focus on tradition and style. Full-bodied and full-flavour, these beers are often quite heavy, bring rich malty sweetness.

The name Quadruple comes from the brewing process of this beer.  Essentially it means you are adding four times the malt as you would in a Belgian “simple”.   This increases the sugar content in the beer and results in a highly alcoholic beer.  The best Belgian quads hide this strong alcoholic flavor making them delicious but dangerous. Quads are highly adored due to their deep color, soft maltiness and unique yeast flavors.  Even with their high ABV (usually 8-12%) they are highly approachable when done right.

ABV – 10.5%
Appearance –  Pours Dark brown with a thin beige head.
Smell – Smells of banana, mocha and raisins.
Taste – Rich malty sweetness that has notes of cocoa, banana, and some peppery notes.
Mouth Feel –  Nice medium carbonation with a full mouthfeel and a lingering warmth on finish.
Overall Thoughts – Overall a nice Belgian quad carrying good esters from the yeast and a full sweetness that lingers warm. Alcohol is well masked.
Do I like it? – I’m a big fan of big bold beers. This was a full and enjoyable Belgian Quad that brought some really tasty flavours and a nice warmth from the alcohol. ABV is Well masked, but certainly still a sipping beer, I definitely enjoyed this one as well.

Overall I was quite impressed with the beers in the “Best of Beau’s” mix pack. I can see why they chose each of these beers. They provide a wide range of styles with some great flavours.

I hope that this write-up was informative. I encourage you to get out and try as many new beers as you can. Broaden your horizons and your palate.

*Writer’s Note: I did receive this pack to review free of charge. This did not influence my write-up. *

One thought on “Best of Beaus Mix Pack”