Stone Angel (1875 Pembina Avenue) is a new Winnipeg brewery that is opening up their taproom this Friday (September 22nd, 2017). Patrons will be able to enjoy two of their finely crafted beers starting at 3:30 pm. Their first seasonal – Nocturne, an English Dark Mild and Red-Handed an Irish Red will be available. Following this opening, Stone Angel will then be open from Thursday-Sunday. Be sure to check their website for hours.

With the taproom opening, the focus shifts towards producing beer. While they have two ready to go, they hope to get their other two core beers, an IPA and a stout, ready to go. Luther’s Folly, their Kolschist Blond will also be returning.

They are also diving right into seasonal beers and planning to get a unique seasonal style ready for Halloween. Their Samhain (pronounced “sowen”) is a smokey porter with dried fruit. From what I’ve been told it is inspired by the Halloween traditions in Ireland.

When it comes to beer production, they will currently be reliant on what they can sell at the taproom until they get their canning line in place which they hope will be in the new year. 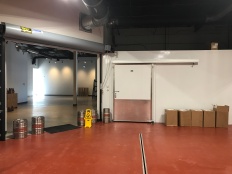 As for the taproom, the space is beautifully done. Currently taprooms are restricted to 50 people despite the size. Stone Angel boasts a large space and five bathrooms and could easily accommodate twice that. With such a large area, they hope that they might be able to do some renovations in the future and expand the seating. There is some hope from them, and others in the Manitoba Brewers Association, that some changes in how occupancy is determined can be made. 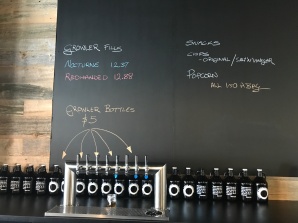 Paul Clerkin from Stone Angel is also hoping to get the website updated. As a web-developer he is quite skilled at putting together websites and wants the Stone Angel website to help people find where they can get their beer and drink it. The idea is to have the website be intuitively designed for use on smartphones so that one can easily find where to get Stone Angel’s beer and get directions.

I’m looking forward to visiting Stone Angel once they open and getting to taste more of their beer. It’s always an exciting time when a new brewery opens. The culmination of an incredible amount of hard work, time, and dedication. These events should be celebrated so I hope everyone will head down to Stone Angel at 1875 Pembina Avenue this Friday (September 22nd, 2017) after 3:30 pm for a pint.

This is certainly becoming a summer of beer. There have been numerous new beers arriving on the shelves of our neighbourhood liquor marts and beer vendors. Flatlanders may have come and gone, but coast to coaster continues as do the hopes of new breweries opening their doors. With One Great City adding themselves to the mix and a few others potentially opening by the end of Summer. In that vein, I finally had the chance to meet up with the folks behind Stone Angel Brewing to check in on their progress and find out a bit about what we can expect from them.

Stone Angel Brewing is a joint venture of three home brewers, Paul, Paul C and Jame Defehr. Paul McMullan worked as a lawyer for 9 years and has been doing private consulting and commercial property work since leaving that behind. Born and raised in Winnipeg, other than the various travels he’s done for work, Paul brings 8 years of home brewing knowledge and a skill for recipe development to the team. Most of the recipes so far are his, but all three main partners will be brewing as they each have their own styles and specialties at which they excel. They’ve even managed to recruit retired chemist Jean Guy Pageau to help with the quality control aspect of the brewery. 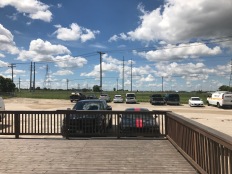 Paul Clerkin is a transplanted Irishmen who has been in Winnipeg for 13 years. He decided to relocate for the “affordable property”. Paul C has been a graphic and web developer for the past 22 years and is responsible for the Stone Angel website as well as many others. He has been home brewing for three years as well and met Paul McMullan through the Irish Association of Manitoba. Both were members of board and the inception of this brewery idea began with an exploration into revitalizing the Irish Association through the opening of a new bar downtown on Portage Avenue. When this ended up not being possible, the two Pauls picked up the torch and kept moving forward.

James Defehr, who likes to be described as resembling a 1977 Harrison Ford, met the Pauls just over 1 year and a half ago. They met through a mutual acquaintance and began discussing home brewing. After that they started working on business plans and, as the legislation changed, so did the possibility of getting the brewery open. They took the plunge and are well on their way to getting Stone Angel up and running. James grew up in Winnipeg but has spent the last 20 years in the US and Mexico before returning to Winnipeg 7 years ago. Before this venture, James worked in the furniture industry doing upholstery. He brings 7 years of home brewing experience.

Stone Angel is located at 1875 Pembina Highway in the old “Vodka Rocks” site. It’s an 8,500 sq/ft building that is deceptively big. They have a huge open field behind the brewery and a nice big patio from which patrons can watch the amazing sunsets. They have space for much more than the current limit placed on taprooms and are ready should the laws shift and the limit be expanded. 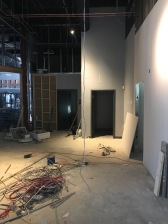 Inside there will be a nice large taproom with a 30ft bar counter. The beer will be coming from kegs in the cooler located just behind. All the washrooms in the building are universal and they have space to hold large events and hope to do so.

They have a 17-hl specific mechanical brewhouse, three 17-hl fermenters, one 35 hl fermenter, and a lonely 35 hl brite-tank that they hope to expand upon soon after opening. They will be starting with their Luther’s Folly, an Irish Red and a Summer fruit beer but hope to expand into porters, stouts and IPAs in the fall. They also plan to have small-batch taproom only stuff to encourage visitors and will likely be doing releases of styles like Belgian dubbels and tripels (and others) in bottles. They also hope to have a canning line in short order. They want to have as many options as possible for people to access their beer. 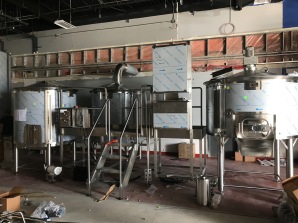 One unique style that we will likely see from them this fall is a Samhain (pronounced “sowen”), a smokey porter with dried fruit. It is reminiscent of the Halloween traditions in Ireland and sounds like it’ll be interesting.

While there is still a lot of finishing work to do on site, the tanks were being installed while I was there. They hope to have all the trades work done by July and then get to brewing some beer, after the final inspections of course. The goal is to open by the end of the summer and I certainly wish them luck. If you are interested, they also have some merchandise for sale on their website.

As always, keep following as I keep track of the expanding beer community here in Winnipeg. Get out, try something new, and experience the new options when it comes to local beer.