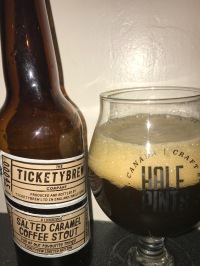 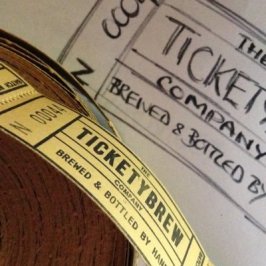 For day 18 we have a Salted Caramel Latte Stout from Ticketybrew out of Manchester, or more specifically Stalybridge,  in the UK.

Ticketybrew was founded on February 14th, 2013 during the day. That evening they brewed their first beer throughout the night. Founded by husband and wife team of Keri and Duncan. Since a young age, Duncan had been interested in acting and over time found that this wasn’t for him. Keri had been working in career that she didn’t really enjoy and wanted more flexibility to spend more time with her kids. So, they brainstormed and as beer had been a great passion of both of theirs, they decided to open a brewery.

Ticketybrew was founded on a base of commitment and love. They love to try new things and to brew different beers. They have continued to grow since their founding but are still a relatively small brewery. They brew a wide range of beers from the Rose Ginger Wheat Beer we will be trying today to a Salted Caramel Coffee Stout. Their beers try to highlight different variations on styles and unique ingredients. They also label all their bottle by hand. The beer from them today is available in bottle or cask and is bottle conditioned still containing leftover yeast sediment in the bottle.

As I’ve said many times on this blog, stouts are one of my favorite styles of beer. Stouts are a dark beer made using roasted malts (or roasted barley), hops, water and yeast. Traditionally the term stout was used to describe the strongest (most alcoholic) porters, typically around 7-8%, produced by a brewery. The name ‘stout’ referred to the often-stouter bottles these brews were sold in, which eventually became the term used to describe the style of beer.

There are numerous sub-styles of stouts ranging from Dry Stouts, to Porters, and Oyster stouts and my favorite, Imperial Stouts. While they had lost popularity after the First World War, they’ve started to have a bit of an upswing due to the growing popularity in craft beer and breweries. Stouts are very versatile, allowing for a lot of creativity in adjuncts and flavouring. You can see many craft breweries playing with stouts regularly. Higher alcohol stouts also often age well, making them a wonderful cellaring beer.

This stout is known as a “sweet stout,” which are much sweeter and less bitter than most other stouts. This is a traditionally English style of stout developed in the early 1900s as a tonic for invalids and nursing mothers. Originally called Milk or Cream stouts, this designation is no longer permitted in England (even if it is everywhere else) and the name derives from the use of lactose, or milk sugar, as a sweetener in the beer. Lactose is not a fermentable sugar and remains after fermentation is complete, which gives this beer its sweet and creamy nature. Onto the beer.

Appearance – Beer burst forward from the bottle upon opening and had a huge amount of carbonation. When finally poured the ½ bottle remaining it poured a hazy dark brown and had a big frothy head that slowly dissipated.
Smell –  Roasted caramel, coffee, slight salt on the nose, some cocoa powder notes and a slightly astringent to the nose aroma.
Taste –  The taste from the chocolate does come through on this beer with that coffee note and a bit of bitterness on the finish. It has a slightly astringent note that seem out of place and a higher than expected carbonation.
Mouth feel – Highly carbonated with fizzy bubbles with a medium body and a bitter-sweet finish.
Overall – I’m really at a lose here. When I think of a sweet stout I often think of a creaminess to the mouthfeel and a nice enhancement on those coffee and caramel notes. Sadly the carbonation detracted from this beer and caused these flavours to be more subdued. When I got past this it was overall pretty decent in respect to what it brought. I thought it might be infected, but I think that was just my over-reacting to the high carbonation and slightly astringent note.
Do I like it? – Sadly no. I think this could have been a fantastic beer. It was bottle conditioned, for some reason, and that didn’t help it overall. The carbonation was higher then it should be, and it really detracted from the beer for me.