The first annual Winnipeg Beer Festival was held at Fort Gibraltor this past weekend. A combination of beer, food, and spirits together on the grounds of the beautiful Fort. The evening was beautiful and the company was fantastic. Overall, the event was well attended and a heck of a lot of fun.

I wrote about the event leading up to it and I wanted to write a follow-up for those who couldn’t make it.

The Winnipeg Beer Festival is an event that was put on in support of the KIDS initiative. Supporting youth in Kenya and providing a fun opportunity for folks to enjoy local beer, food, and some games and prizes. As I said, this is the first year for this event and I must say that it was overall a successful endeavor. 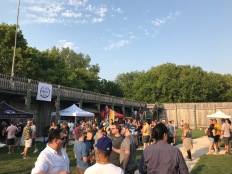 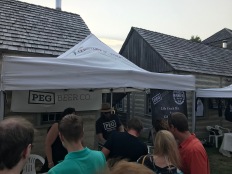 Many local brewers were in attendance. I’m disappointed that more couldn’t make it, but those who did attend were well received. The beers presented were standard fare for the breweries which was a bit disappointing. Often festivals like this are a chance to present new beers or offer up something unique. Being the first festival, breweries brought what they had available. I think in the future should this event continue, and I hope it does, breweries will see it as an opportunity to present fall/winter offerings and build some hype for beers to come. 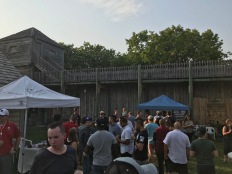 The event was also a bit of a competition between the breweries. Patrons could vote, using bottle caps, for a beer that they felt was the best. While this provided an opportunity to narrow it down to a specific beer, it also disadvantaged breweries with fewer beers. While not commenting on what is better/worse, the styles were so varied it was apples to oranges to pears, having less beer available meant the vote for you wasn’t split quite as much. In the future voting on the beers at a brewery might be a better way to go rather then a specific beer. 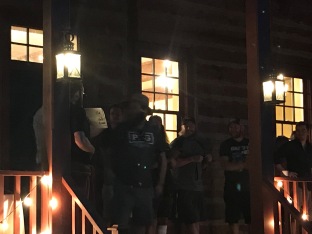 Taking home the first every Gold for this event was PEG with their GT Gose. Little Brown Jug took silver for 1919 and Torque took bronze for Witty Belgian.

As this was the first year for this event, tickets were handed to limit beer consumed by patrons. Each patron was given 20 tickets for beer and 4 for liquor. While at first this might feel like it’s not enough, for many it proved to be too many. I think that given the event is four hours, 6-10pm, having it be in the same vein as Flatlanders would provide people an opportunity to enjoy beverages without feeling as if they must use all 20. Even though I don’t go to these events trying to drink as much as possible, I left feeling like I had wasted some tickets. I do think if this route is taken, limiting hard liquor would still be valuable.

Overall the evening was incredibly enjoyable. The community of beer drinkers is easy to chat with and while waiting in the lengthy lines it was nice to chat to pass the time. As more breweries open up locally, this event will grow and bring more options and more competition. I for one am excited about a completely local beer event and I really can’t wait to see what it’s like next year.

Thanks for following this blog and please subscribe and follow me on twitter. I am going to keep working at following the craft beer scene here in Manitoba and I might even expand it a bit to cover what’s happening with local spirits as well. With some of the new breweries on the cusp of opening, Surly bringing more beer to Manitoba, and lots of brewers to interview, it’s gonna be a good year.