May is a ridiculously busy month for me with work. It seems to be a series of meetings followed by other meetings and a few trips away. It’s hard doing all this with a new baby at home as I just end up missing her and my wife that much more. But, the month of May is coming to an end, and I’ve got a few things to update on.

First, the second annual get to know a brewer event is coming up on June 6th. This year it will be held at Brazen Hall. Tickets are available here. Last year I had the chance to attend the event and it was a fantastic precursor to Flatlanders. You get an opportunity for a sneak peek at what will be coming and a chance to speak one on one with the brewers and other folks from the local breweries. If you’ve never been, I highly suggest you go. It’s a fantastic event and well worth it.

Second, as I mentioned above, Flatlanders Beer Festival is fast approaching. Last years saw our first glimpse at some of the upcoming breweries. This year, we have our newly established brewery folks joining with our long-standing ones and some potential newcomers. All this along with other brewers from across Canada and around the world. This is the pinnacle of beer in Manitoba as it brings together so much from so far. If you love beer, go to this event. Come say hi, I’ll be in a Yellow Beer Geek shirt.

Finally, I wanted to take a moment to talk about the fantastic launch event that Nonsuch held this past Thursday, May 25th.

I had the good fortune of meeting the guys from Nonsuch and chatting with them about their vision a while back. While they’ve had some trouble finding a location, they are very close. This hasn’t prevented them from doing what they set out to do, brewing beer, and we should see their beers showing up in the Liquor Marts by June.

Nonsuch has been brewing in collaboration with Barn Hammer to perfect their beers and get everything where they want it to be. At the launch party, they debuted their Old Ale, Belgian Strong, Saison and Biére de Garde. I had a chance to try each one of these beers and was overall very impressed with the quality and taste. I’m quite excited to see these beers start showing up in the Liquor Marts.

What’s impressive is that they have been sticking to their original plan of brewing with spring water and selling in caged and corked 750ml bottles. The bottles look sharp and with the beer inside being darn good, I think they’ve got a product that many people in the city will enjoy. 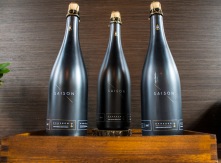 While I don’t want to write a full review of the beers I tasted, I do want to say that each one of the four beers were top notch. Mark has a unique ability to adjust his beers on the fly and come up with a result that is tasty and enjoyable to drink.

As we approach Flatlanders and the Manitoba Brewers’ Association event, there are numerous opportunities to meet those brewing our beer and taste what they’ve got to offer. There are sure to be some special ones so be sure to get out and give them a try.

Thanks again for following, and be sure to check back for more

One thought on “Nonsuch Launch Party”