I chatted with Matt Tallman, President and CEO of TransCanada Brewing Company this past week. He invited me to their space at 1290 Kenaston, gave me a tour and shared details about what you should expect from TCB when they open.

Matt has been working on this project fully since April 2015. It’s been a journey to get to this point and it was really interesting to hear Matt walk me through the process.

Matt has always dreamed of opening his own business. When he graduated high school in ’09 he took a business program at UNC. After a couple of years of traditional classes, he spent a semester at sea through a university in Virginia. The ocean-spanning classes gave him a chance to travel and see a lot of neat stuff.

He eventually transferred to University of Western Ontario’s ivy business program – the HBA. While digesting a lot of ideas there, Matt was exposed to Ontario’s rich craft beer scene. Though he took another semester at sea to get some more travelling under his belt, he returned to Canada with a purpose, having explored the beer industry in many different countries across five continents.

When Matt rolled back into Winnipeg he had a vision to expand local beer offerings. (At the time only Half Pints and Fort Garry were operating, with Farmery just starting.) Matt felt, like many others, there was a need for more local brewing in the city and he wanted to create a truly world class venue in Winnipeg. After setting his mind to this he spent a time working through vision and decided to start the project in April of 2015. Matt feels that there is a lot of opportunity in the market and that people are more interested in where their food and beverage come from, who makes it and how it’s made.

A lot of people are curious about the name behind the brewery. Matt said he is often asked “Why TransCanada?” Initially he went through piles of names and had lots of ideas. One day Matt just had TransCanada pop into his head and felt it was so uniquely Canadian that it fit what he wanted the brewery to embody. With its historic and modern usage and the fact that on an average day you’ll hear it mentioned in the radio or see it written on your drive, Matt felt this was a name that was timeless.

The branding for TCB is Canadiana, with design elements pulled from an earlier era (1950s-60s) to give a taste of nostalgia. While referencing the period, TCB’s branding is also meant to be timeless – something that won’t expire or go out of fashion.

As a local brewery, Matt is very excited to produce beers with local ingredients and work with local suppliers and producers. His brewery concept is very Canada centric and he wants to explore different Canadian symbols and events in history. Overall he hopes TCB will be a celebration of Canada

Matt spent eight months looking for a site before settling on 1290 Kenaston. He explained it had been a very long process and he is excited to finally get started. If all goes according to plan, TCB will open in Q2 of 2017. 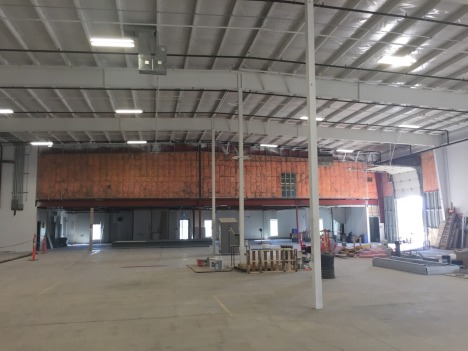 The concept behind TCB is interesting. While they will have a taproom they are looking at doing pizzas and will have a dedicated pizza space, pizza oven and kitchen. Matt explained the plans were being discussed before recent taproom legislation came into effect. After looking at the legislation and taproom license, he decided it made more sense to do manufacturing, restaurant and retail. All components are part of one business. The idea is not to be a brewpub but a production brewery with a taproom attached. This is very casual meeting space with no assigned seating, servers, etc. It’s a place to come and hang out and chat, enjoy the beer from the brewery and have a pizza or a beer-related snack from a set menu.

Between the taproom and the brewery there will be a wall featuring 20 ft. tall windows. These windows will stretch almost floor to ceiling. Matt wants people to see what’s happening live during the day or have a nice brewery backdrop in the evening. He plans on having some funky lights shining on the brewhouse and tanks to create an ambiance for the taproom.

At the bar area, Matt plans to have 16 taps. He would like one of these taps to be local/craft brewery rotating guest tap. As I hinted above, the taproom will be decorated with Canadiana. As well, there will be a private function room for events and parties. It will have the same taps as the main bar area to optimize its use for any event. This room, too, will have windows letting you see down into the main taproom and there will be A/V equipment for meetings.

Right now, Matt is the only employee of TCB but he does have two others helping out who will eventually join him full time. First is Thomas Schneider. This head Pizzaiaolo (pizza guy) has been in the pizza industry for a number of years. He’ll run a dedicated Pizza area within the taproom called “Timmy Toms Pizzeria” and produce a very unique hybrid pizza. It’s close to New York style but with twisted dough prepared for individual-size orders. When the team decided pizza was the way to go, they took a trip down to San Francisco to meet pizza guru Tony Gemignani. He runs the International School of Pizza where the guys took a week-long course on making, baking, serving and selling pizza. Matt is really excited about the pizza – both the variety the can bake and the special release combinations they can curate.

Also on board is Jeff Wirt. His future role will be accounting and administration but he is currently assisting with everything – a true renaissance man. Thanks to a lot of hard work, they’ve just posted the job to round out their team and hire a Head Brewer, with the ambitious goal of enticing a world class brewer to come and prepare the best beer possible.

On the production side of things, there will be an overhead door separating the taproom and brewery to allow for them to hold open houses and for easy movement of kegs to the taproom.

The main brewhouse is built by Specific Mechanical from Victoria, BC. It is a 35hl four vessel brew house with state of the art technology operated by touch screen controls. It has a 5 HL pilot system fully integrated into the one brewhouse.  It’s fully capable of any style of beer and can do decoction mashes, kettle souring and multi-stage mashes. There are essentially two separate brewhouses, fermenters and bright tanks at TCB. For the small batch system, Matt plans to have six 10 HL fermenters and two 10 HL bright tanks while there will be six 70 HL fermenters and two 70HL HL bright tanks for the big system. 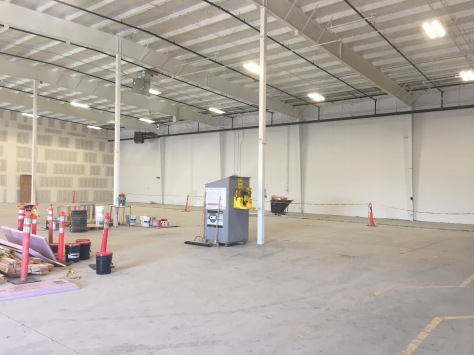 This will allow for the production of small and large batches. Matt tried to automate some of the brewery to make it easier to flow and to expand in the future. To accommodate this, he is going to install a grain silo just outside with an auger through the wall that will go directly into the surge hopper and then feed to the malt cracker, grist case, and then into the mash tun. It’s a hands off approach for base malt and all of the spent grain will be augered to silo before being trucked out for feed. While specialty malt will have to be added by hand, this allows for some automation with the largest quantity malt.

The brewery is designed to be scalable, adding more tanks if there is a need. The space allows them to double capacity if necessary, following a flow pattern Matt designed to be sustainable in the future.

Matt really wanted the ability to produce sour beers. As part of TCB’s design a dedicated space has been set aside as “the barrel room.” This climate-controlled room, with closely monitored humidity and temperature, will house 40HL Foeders from France made from oak as well as additional barrels. A glycol system will allow for precise temperature control within the room itself as well as overall temperature control. The room will act as an aging and conditioning room where, thanks to the Foeders, TCB will have the ability to really experiment with sour beers and barrel aged beers. It’ll be a slow start, but Matt is very excited about the potential.

The main packaging line from German company Markl will allow them to bottle their main beer in open carriers of 355ml bottles and 650ml bombers. They’ll also have the ability to do cork and caging on a specialty packaging line they will use exclusively for 750ml bottles of beer from the barrel room. While Matt said they don’t plan to can, they do have the ability to add a canning line.

When I was walking around the space, everything was nice and open now, but it will be quite full when all the equipment is in. You just have to use a little bit of imagination.

As for the beers, Matt wants to brew many styles of beer. Obviously a lot will depend on the Brewer who joins the team, but the brewery is designed to produce a diverse array of beers including barrel aged beers, experimental beers, and mainstream styles. It’s a flexibility that matches its owner’s tastes in beer, though go-to styles for Matt to drink are American Pale ales and German Wheat ales (hefeweizen/dunkelweizen).

The beer will be distributed to Liquormarts, beer vendors, as well as sold on site from their retail section. Some specialty beers and those produced in the small batch system will only be available on site.

It was a great opportunity to chat with Matt. I’ve known about TransCanada for quite some time and I’ve been trying to get him to give me some details. Having the opportunity to hear about the plan is exciting. I can’t wait to see how things progress and to have the opportunity to visit along the way. Matt has a pretty swanky T-shirt he’s made, and if you’re interested, just contact him through their website and he’ll give you the details on how to get one of your own.