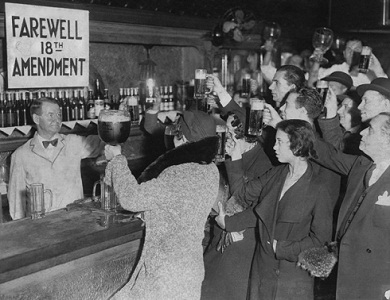 If you loved beer, living in the United States between 1920 and 1933 was an incredibly sad time.  During this time prohibition had been in effect and it was illegal for any form of alcohol to be sold or consumed.

In Manitoba after 1923 there remained a fairly restrictive liquor act in effect until 1956. The act allowed only for the purchase of 24 quarts a week or 72 quarts of beer per month. Liquor could only be consumed at home and it was illegal to barter or transport alcohol. 10 rate payers could also stop the establishment of a licensed premise or a beer vendor and as we know Steinbach remained dry until 2008.

You can see a pretty interesting run down of liquor laws in Manitoba here.

Prince Edward Island kept prohibition on the books the longest. Their law remained in effect until 1948!

But why is it New Beers Eve? Well the beginning of the end started with the passing of the Cullen-Harrison Act on March 22nd, 1933. This legislation enacted the 21st amendment to the US Constitution which repealed the 18th amendment which had enacted prohibition. The 18th amendment had been in effect since January 17th, 1920.

Take a look at this newspaper page from the Chattanooga News from January 14th, 1920.

The legislation came into effect on April 7th, and so April 6th became an unofficial holiday in the United States, New Beers Eve. It’s said that upon signing the legislation Franklin D. Roosevelt said “I think this would be a good time for beer”.

This act also legalized the sale in the United States of beer with an alcohol content of 3.2%(by weight) and wine with a similarly low alcohol content.  With this percentage the argument was that it was too low to be intoxicating. Still it did allow for states to have some control over their sale of alcohol. In fact many states remained dry for years with the last one dropping prohibition in 1966. To this day there are still some dry counties which prohibit the sale of alcohol. You can see where liquor laws stand now in states here.

And so, on the first New Beers Eve, April 6th, 1933, people lined up outside of breweries and taverns, who could legally open their doors at Midnight on April 7th, to enjoy their first legal beer in many years.  Franklin D. Roosevelt even took part in the celebrations and is said to have had a wagon drawn by Clydesdale horses bring beer up to the white house on April 7th, 1933. New Beers Eve also precedes another unofficial holiday, National Beer Day, which of course is every April 7th.

So, enjoy your day and enjoy your eve, let’s help our neighbors to the south celebrate the end of their prohibition. After all, those of us in Manitoba had 10 more years of beer then they did.