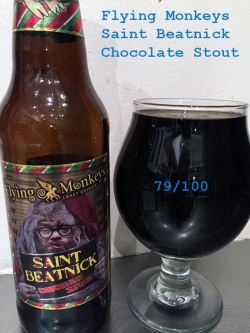 I’ve made it to the halfway point of this 24 day beer blogging journey through beers and styles from across North America.  It has been pretty fun so far.  As with last year, I am finding myself learning more about the various styles of beers (I’ve taken up reading the Beer Judge Certification Program guidelines on the styles when possible) as well as more about breweries that I may wish to visit in the future.  I hope that those of you who are taking the time out of your days to follow along and read these blog posts are finding them both interesting and informative.

Today’s beer comes to us from a familiar brewery here in Manitoba, Flying Monkeys Craft Brewery located in Barrie, Ontario.  I’ve had the opportunity to try a number of there beers and I haven’t often been disappointed.  We tend to get a number of them in at the Liquor Marts here and they are a pretty solid go to beer when you aren’t really sure what to try.  The beer we have from them today is one that I have not had the chance to try before, Saint Beatnick Chocolate Stout.

Founded in 2004, Flying Monkeys Craft Brewery was originally called “the Robert Simpson Brewing Company”.  It is located right on the waterfront of downtown Barrie, Ontario, and prides themselves on being unique.  Making an effort to cast aside the concept of Macro-brewing and small batch “taste-a-likes” Flying Monkeys cast aside their original name 2008 to show their true selves.  Since then they have made every effort to brew collaboratively and creatively brewing adventuresome beers that fill the needs of craft beer drinkers in Ontario.

The brew master at Flying Monkeys, Peter Chiodo (Not the mobster…), learned the ropes of home brewing from his grandfather in an Etobicoke basement. He refined his skills as a broke university student in Alabama, then as a broke grad student in Mississippi.  Having honed his skills, Peter also developed a passion for beer that is made by hand, not by machines, and has a passion for locally brewed craft beers.  Beer site, whatsbrewin.ca visited Flying Monkey’s and spoke with Peter.  You can watch there video of that here.

Flying Monkeys takes a pretty firm stance on brewing beer on their website (which is also a bit weird itself). They say:

“Any Craft Brewer worth anything started somewhere as a Home Brewer. We learned the craft, we followed the curve, and we invested our All. If a Craft Brewery started solely as a name, a brand, or a business plan, then shame on them. Marketing is not Brewing.”

This statement gives you a pretty good idea of how they feel about craft beer.  They have a number of interesting beers and I suggest you take a look and when you see one at the Liquor Mart, give it a try.  You never know, you might like it.

This is another stout, although a different variation on the style.  I already did a write up on stouts on Day 2 and so if you are interested in reading a bit more about the Stout style, feel free to take a look at that one.  I will say that Chocolate stouts are beers which have noticeable dark chocolate notes both in flavor as well as in colour.  This is done through the use of darker, more aromatic malts.  Specially, chocolate malts, malts which have been roasted or kilned until they develop a chocolate colour.  In some instances, chocolate stouts can actually be brewed with real chocolate.  I’ve read nothing to indicate that is the case with this beer.  Enough about it, let’s get to it.

Appearance:  Dark chocolate in color with a very thin off-white head that fades quickly leaving little lacing.
Smell: Dominated by chocolate followed by slight alcohol smell, almost as though it has been aged in whiskey barrels though there is no indication this is the case.  Very little else is noticeable on the nose.
Taste:  Mocha comes through strong followed by a bitter finish and lingering alcohol taste.  This beer tastes a lot like an Irish coffee in a lot of ways.
Mouthfeel: Soft carbonation, creamy mouthfeel, lingering alcohol and bitter finish.
Overall: Lives up to its name. The sweetness on the nose is quite overpowering but is less in the flavor. The carbonation is soft which is good, but I feel that the chocolate notes and sweetness almost overpower many of the other flavors that might be there. The chocolate and the lingering alcohol flavor certainly stand as the stars in this chocolate stout, which likely is the point.  Overall the chocolate is certainly the star in this stout with lingering alcohol flavors and good aroma.
Do I like it: I find the sweetness of this one to be a little overpowering for me. It’s not that I don’t like it, I think it is okay, it is just that the sticky sweetness is a bit much. Overall, I’d probably have this one again but I think I prefer other offerings from Flying Monkeys and would be more likely to gravitate towards them.