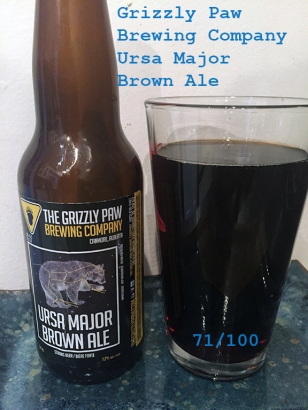 This week has been a pretty hectic week.  I’ve been working as usual but with extra meetings during the day and in the evenings.  I also happen to have a meeting this weekend.  Normally this would not be that bad, it’s pretty common place for me.  Unfortunately, I happen to also be trying to finalize my thesis presentation for my defense, practice this, and come up with questions I might be asked.  This has added a bit of stress to my week.  Luckily, I always have a beer waiting for me to try and so far I’ve been pretty happy with most of them.

On day 11 of the advent calendar I get to try a beer from a brewery I’ve had the opportunity to visit.  It is Grizzly Paw Brewing Company’s Ursa Major Brown Ale.

Grizzly Paw is a brewpub located on Canmore’s Main Street in the Canadian Rockies.  It’s a beautiful location surrounded by the mountains and on a clear day it’s just absolutely spectacular.  I had the opportunity to visit with my brother a few years back and it’s almost surreal to sit amongst the Rockies enjoying a fresh pint of beer right from the brewery itself.

The owner, Niall Fraser, got the idea for opening this brew pub from his frequent visits to “The Rocks” in Sydney, Australia.  While he was living there he frequented this brewery/pub and was impressed by the setup on old granite rocks nestled in the famous historic district between the Sydney Harbour Bridge and Sydney Opera House.

When he returned to Canada, he sought a perfect location to open his brewpub and finally found it while on a mini-vacation, Canmore, Alberta.  On April 29th, 1996, the brewery opened its doors for the first time and has been trucking away ever since.  Originally brewing a partial mash and only 200 litres at time, the brewery grew substantially and by 2009 they needed to open a brand new brewery to keep up with demand.  In April, 2013, the new brewery opened up and at 20,000 sq/ft the space is quite large.

Not only does Grizzly Paw brew beers, they also make micro-brewed sodas, make great burgers using Alberta beef, and other foods as well.  Being Canada’s first brewpub, Grizzly Paw offers quite a lot of variety and acts as a tourist attraction.

This beer is an American brown ale.  These ales get their origins from the originally English brown ales.  The term brown ale was first used in the 17th century.  These beers varied in alcohol content but were usually brewed with light hops and brown malt.  They grew to fame in the 1925 with the release of Newcastle Brown Ale which set the stage for the success of future beers in this style. In 1986, craft beer pioneers Pete Slosberg and Mark Bronder released “Pete’s Wicked Ale” which basically set the stage for the American Brown Ale style.

This style includes the dark-brown ales from southern England, reddish-brown ales from northeast England, and even the slightly sour brown ales from Flanders.  American Brown Ales are a recognized member of this spectrum and tend to have more hop bitterness than their English cousins.  The style is also lower on the alcohol spectrum, typically between 3.3% and 5%, has caramel and chocolate malt characteristics, low to medium hop aroma and medium to high hop bitterness.  On to the beer.

Appearance:  Rich and clear dark brown with very little head even though I poured it somewhat aggressively.
Smell: Caramel, chocolate, roasted malts as well as notes of hop tartness.
Taste:  Malty on the front, but not a very deep richness to the malt flavours, they fade quickly to a mild bitterness from the hops that lingers. Dry on the finish with slight citrus.
Mouthfeel: Soft mouthfeel with very low carbonation, this one is almost flat to me. It is likely due to age or transport. Dry finish with slight citrus notes.
Overall: American Brown Ale styles should be dominated by the hop bitterness with the malt flavours playing a supporting role. This one certainly has the hop bitterness as the star as the malty sweetness fades quickly to the bitterness from the hops.  It has a dry finish as well as some very soft citrus notes.  Roasted malt is present which compliments the hop bitterness nicely.  The lack of carbonation takes the rest of the flavours down a notch and they don’t taste as full as I would have expected.
Do I like it: It’s not bad. I don’t drink a lot of brown ales and those that I do I prefer of the other various styles of this category, specifically the sour ones from Flanders.  It’s a nice beer that if it wasn’t almost flat I would likely have enjoyed more. It’s one of the risks with this calendar given that the beers tend to sit a while and have to be transported.