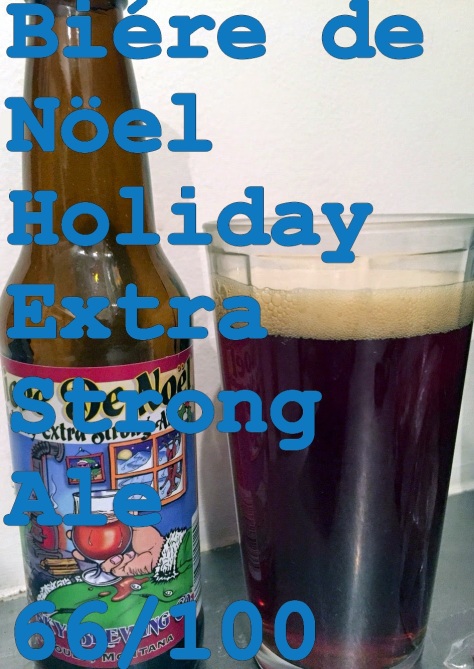 Well, after getting everything organized with the beers from the advent calendar, this morning was a heck of a lot easier.  It’s kind of funny how something so little like having a beer to open every morning can make a craft beer lovers’ day.  It’s also really interesting to take the time to research the breweries and the style of beer.

The 6th beer of the calendar is from Montana, specifically Missoula.  It’s Big Sky Brewery’s Bière de Noël Extra Strong Ale.  What is somewhat disappointing, is that I had this exact beer on Day 12 of last years’ advent calendar.  What is kind of exciting, is that I get to try it again.  Last year I didn’t really like the beer.  Since then I’ve grown in my palate and my tastes and I am curious to see what I think about it this year.

I’m going to copy myself.  I wrote all about the style and the brewery last year so if it looks familiar it is.  What will be different is the tasting notes and rating.  If you’re curious what I said about it last year you can read my review here.

Big sky was started by Neal Leathers, Bjorn Nabozney, and Brad Robinson.  It all began with Brad and Neal, home brewers since the 80s, when they first came together they began producing a series on their local cable access station called “Beer talk”.  It was a show about Brad and Neal tasting various beers and commenting on what they liked and did not like.  This brought attention to the duo and showed their passion for beer.  Sadly, neither of them were business savvy.  That’s where Bjorn came in.

Neal started brewing test batches while Bjorn and Brad raised the capital.  After about a year and a half, Big Sky Brewing was officially ready to open its doors.  They brewed their first batch of beer, Whistle Pig Red Ale, in mid-June of 1995.   They started out as a draft only brewery but today they are one of the 50 largest breweries in the U.S. selling a total of over 46,500 barrels (2.5 million 6 packs) of beer a year.  They sell in over 24 states so it’s a beer you might be likely to run across.

The beer we are trying today is not one of their standard brews.  It’s a seasonal beer that they bring out only around this time of year.  It is the Biére de Nöel Holiday Extra Strong Ale.  This is a limited edition beer from the company brewed in the style of a Belgian Dark Ale.  It sits at about 10.13% alcohol/volume.

Belgian Darks offer a really wide range of characters.  The colours can be in a variety of hues from amber to light brown to deep garnet.  Flavours range between dry and spiced to sweet and malty.  Most usually have low bitterness but this one comes in at a pretty good 35 IBU (international bittering units).  The average IBU of IPAs come in at the 40+ range.  I’m pretty excited to give this one another try, so let’s get to the beer!

Appearance:  Amber brown with 1”
Smell: Caramel, toffee malt notes, dried fruit and pepper on the nose.
Taste: Unfortunately this beer tastes as though it has been exposed to oxygen.  This has resulted into an almost cardboard flavour which is not appealing.
Overall: Second time I have had this beer and the second time I have found it to be bad. Whether this is a result of the calendar itself and the time the beer has sat, the storage of the beer, or the packaging, this beer tastes off and has some serious oxidization problems.
Do I like it: Last year, I had felt this beer was overly alcoholic and not properly balanced.  This year, I have noticed off flavours and oxidization which have resulted in a weird taste and really not an appealing beer.  I am not sure what in particular it is about this beer, but this year as last I do not like this one.