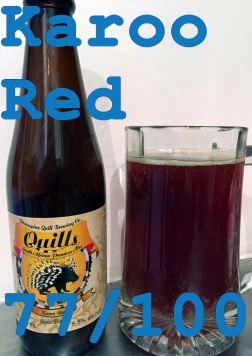 My wife and I were going over in our heads the countries and continents we have already seen so far this month.  We were figuring out which continents we have yet to visit of the 6 featured.  So far we are only missing Africa and Asia.   I guessed that we would be seeing a beer from South Africa shortly and lo and behold, today’s beer is from Africa!  South Africa to boot.

Porcupine Quill Microbrewery is located in the Valley of 1000 Hills, Bothas Hill, Kwazulu Natal, South Africa.  Bothas is 600km southeast of Johannesburg and is on the eastern edge of South Africa right on the ocean. They produce beer under 3 labels: Porcupine Quills, Dam Wolf and African Moon. They produce a total of 8 beers under the labels in a variety of styles.

The brewery is located in the same building as a deli in the Bothas region and they serve locally made food as well as their local brew.  The brewery itself is a 6 barrel brewery system imported from the UK.  Another rather small brewery, they are only producing 980 litres of beer at any given time.  The system can only use whole flower hops as opposed to manufactured hop pellets, which are used in many other brewing processes.  This gives a fresher hop flavour to beer and combined with their chemical free production method makes for a very “wholesome” beer.

One important thing to note is that this brewery does what is called “natural bottle conditioning” for the beer. Conditioning has to do with how the beer becomes carbonated. While many larger breweries will artificially carbonate beer by forcing CO2 gas into the entire batch of beer, bottle conditioning is more traditional for small batch beer.  It is, actually, how home brew is carbonated.

At the end of the fermentation process some residual yeast is still in the beer.  Extra sugar, typically dextrose as it dissolves best, is added just before bottling.  This allows the beer to carbonate while in the bottle.  This results in a yeastier smell and flavour to the beer as well as mild sediment.  It is however also a more natural way of carbonating the beer.

The beer we are trying from them today is the Porcupine Quills Karoo Red. It’s an American amber ale that has been highly hopped with Williamette whole flower hops to give it a pronounced bitterness.  Coming in at 49 International Bitterness Units (IBU), it’s right up there with any IPA.  Similar in style to the Hopped Red Ale we had from Australia, I’m curious whether the makers of the Calendar consider this to be a different style simply because it is called a Red Ale rather than an India Red Ale.  Either way, I am excited to give it a try!

Appearance:  Cloudy amber with no noticeable head.
Smell: Caramel, yeast and floral notes from the hops.
Taste: Sweet malty caramel that flows smoothly into bitterness that is enjoyable for those who like it.  Certainly well-hopped.  Balance is right for a hoppy beer with the sweetness making way for the bitterness on the finish and allowing it to shine as the star.  The hops in this beer are one that carry a citrus flavour that blends well with the other flavours, caramel, malt, and slight yeastiness from the natural bottle conditioning.
Mouth feel: Medium bodied beer that is well carbonated and has a coarse mouth feel.
Overall: Excellent hoppy red ale that shows of the flavour of the Williamette hop while still balancing well with the sweet malts.  The yeastiness from the bottle conditioning detracts somewhat from the overall flavour of the beer and brings the overall flavour of the beer down a bit.  While it is a decent red ale, there is certainly room for improvement.
Do I like it: Yes, I did like this beer.  I am a big fan of hops and I love having the opportunity to try ones which are being showcased.  Having a single hop in a beer and allowing it to shine is an excellent way to give someone the opportunity to really taste a particular hop.  Most IPAs and hopped beers use multiple hops to create broad flavour profiles.  I really enjoyed getting to try the Williamette hop and I’d be happy to see it show up in other beers.