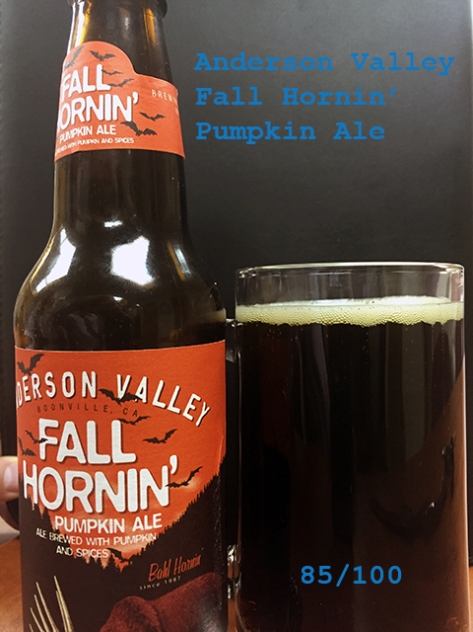 As with every year, opening up that first advent calendar tab is incredibly exciting.  It brings me back to when I was a kid and my mom would buy us an advent calendar with little chocolates inside. Every day was a different chocolate and every day was a little bit of excitement.  Translate that to an adult version with beer instead of chocolate, I’m a happy camper. Nostalgic.

So, like I did last year, with sincere anticipation I opened the first tab and lo and behold, it was Anderson Valley’s Fall Hornin’ Pumpkin Ale.

Pumpkin Ales are typically fall seasonal beers, though Anderson Valley’s is available from August-October.  They are really quite varied.  Some of the style use actual pumpkin, others use yams, and some still don’t use either but just use pumpkin spices.  Some breweries drop hand cut pumpkins into the mash while others use pumpkin puree or flavoring at different points in the brew.  However you cut it, pumpkin beers are meant to represent fall by bringing forward those delicious pumpkin pie spices: cinnamon, nutmeg, allspice, cloves, and ground ginger.

Pumpkin Ales are typically mild with little to no bitterness, quite a malty backbone with the spices usually the most prominent flavor on the front.  Many will also have a slightly thick mouthfeel to them.  These types of beers are a trend that seems to have been quite popular here in Manitoba this past October with a huge number of pumpkin ales being available on the shelves.

The one we have today is from Anderson Valley, located in Boonvile, California.  I’ve had a number of Anderson Valley’s beers and many of them are available at Barley Brothers.  They make a fantastic Blood Orange Gose as well as a really nice Turkey Bourbon Barrel Aged Stout.  Both of these are quite tasty, especially fresh.

Anderson Valley Brewing Company was founded on December 26th, 1987.  Originally they brewed with a 10-barrel brewhouse located on the lower level of their original brewpub, the Buckhorn Saloon.  At the time, they were one of only 20 craft breweries in the country and they are considered to be one of the pioneers of the craft beer industry.  In 1996 they expanded to a 30-barel facility at the corner of highways 128 and 253 (Why they have a 128 series of beer).  They were able to double their production to 15’000 barrels and began bottling as well.  In 1998 they built a three-story Bavarian style brewhouse with beautiful copper kettles.

What is really unique about Anderson Valley is that in 2006 they installed an array of 768 solar panels on top of their brewhouse and employee parking structure.  Since then, they’ve relied on the Sun to provide 40% of the energy they need to run the brewery.  Along with this, they have a strong ecological commitment which they outline here.

Brew Master Fal Allen came to the brewery through a circuitous route starting in Hawaii before brewing at Red Hook and Pike Place in Seattle followed short stints at other breweries along the way including Anderson Valley twice (he left to brew in Singapore for a bit).  They have quite a large team and their website has little interviews with the members. I’d suggest checking it out.

I’d also suggest you take a look at the part of their website that outlines the language “Boontling”. It’s pretty interesting.  With that said, I’m going to rate the beer.

Taste – Spices come through right on the front and are quite present. This moves into a malty smooth flavor that is really quite pleasant.

Do I like it? – Yes, I do like it.  I am not a fan of all the pumpkin ales that are available.  There are some that I find really nice and pleasant and this happens to be one of them.  I enjoyed this beer and felt that it had a lot of nice spice notes to it combined with a smooth malty backbone.  Overall it was really quite nice.  I’d certainly buy this if I had the opportunity to do so.