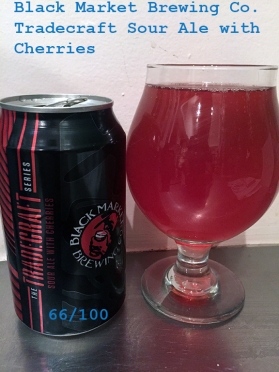 So, remember a long time back when I was complaining about how the beer I took out was the wrong one. That it resulted in me having to have all the beers taken out and organized because the box was annoying.  Well, today, I finally get to try that beer!  It is day 17 and I’m looking forward to it.

The beer we have today comes to us from Black Market Brewing in Temecula California. It is there Tradecraft Cherry Sour.

Not only does Black Market Brewing have a pretty cool name, they also have a really well done website.  Starting out from humble beginnings of essentially a large garage and a 1 barrel system, Black Market Brewing has always put the emphasis on creating good beer.  Starting with what is now one of their most loved beers, a hefeweizen, they have always committed to using only the best malt, hops and yeast that are all hand selected by the brewing team.

Black Market is one of Temecula’s first craft breweries and helped to introduce locally crafted beers to the community.  Coming from wine country they had a lot of discerning wine lovers to convince, and they’ve done that.  Now sold not only all over Southern California, but also in Washington State and Arizona.

Founded by Kevin Dyer dream to start a brewery began with watching the growth of Sierra Nevada Brewing Company and how it built itself into one of the finest American craft breweries.  Having worked in corporate America for a time, he grew bored and in 2007 founded what would become Black Market Brewing in an 800sq/ft garage.   As Black Market grew, so did the team, as have the wide variety of interesting, spy inspired, beers.

The beer we have today is a Sour Cherry beer.  It is essentially a Berliner Weisse that has had syrup infused into it rather than added afterwards.  Berliner Weisse is a really interesting style of beer, one that we will have the chance to try here in Winnipeg once Peg Beer Co. opens.

Berliner Weisse literally translates to Berlin White and it is a regional variation on the white beer style from northern Germany which dates back to the 16th century.  The fermentation of this style takes place with a mixture of yeast and lactic acid bacteria (lacto-bacillus for example) which is what creates the distinguishing feature of a Berliner Weisse.

By the 19th century, it was the most popular style of beer in Germany with up to fifty breweries making it.  By the 20th century, it had gone almost extinct with only two breweries left making this style.  What is interesting about this beer is that it has been given geographic indication protection.  This means that only this style brewed inside of Berlin can legally be sold as “Berliner Weisse”.  In America and Canada they are typically labelled and sold as “Weisse” beers.

The style is traditionally served in bowl like glasses with a number of different syrups that can be added to provide additional flavourings. The beer can also be mixed with other styles, like a pale lager, to balance the sourness.  I’ve always thought that a Canadian Berliner Weisse would be served with maple syrup and perhaps a garnish of candied bacon. Who knows? In the case of the beer we are trying today, it has been already flavoured with Cherries but is described on the breweries website as using their “Berliner Weisse” as the base.

Appearance:  Light pink in color, good head that fades quickly leaving small bubbles on surface.
Smell: There are slight cherry notes, but, predominately is a cheese smell. Like stinky cheese and not wholly appealing.
Taste:  Starts of nice on the front with sour cherry notes. The finish is that of stinky cheese that grows and continues to invade your taste buds. Unfortunately this was incredibly unappealing and I could not push through it.
Mouthfeel: Light bodied with good carbonation, sour/cheese finish.
Overall: Unfortunately this beer tasted more like stinky cheese with slight sour cherry notes than what I would expect. Overall it was unappealing and I was unable to finish it.
Do I like it: Nope. Stinky cheese flavor that grew as I drank it. Could not handle this one and made me feel nauseous.