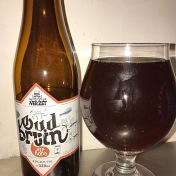 To begin, I’d like to note that tomorrow, December 21st, starting at 4pm Half Pints will be having it’s 12 beers of Christmas event at their taproom. This looks like it’ll be a lot of fun, so go check it out. They have details on their Facebook page.

Today, we have a beer coming to us from Brouwers Verzet in Anzegem, Belgium. It’s a traditional style of beer called an Oud Bruin. The name of this beer is Hip Hops Oud Bruin.

In 2008 three friends, Alex, Joran and Koen, made their way to the brewery school located in Ghent. After training in the craft and learning what it meant to be a brewer and to run a brewery, all found jobs at professional breweries and began honing their craft. After some time, they developed an itch to do their own thing and try their own recipes. They began experimenting in their own time and brewing interesting beers as a diversion. This is where the name “Brewers Resistance” comes from.

After getting rave reviews from friends and family, and seeing the demand for the beers they were making grown, the three friends decided to take the leap and go head first into the business. So, in 2011 the brewery was born. While they do not have a space of their own, they brew their beers out of other local breweries under the watchful eye of experienced brewmasters. They are left to experiment and create their own beers, but they are given guidance and assistance in doing so.

Oud Bruins (Old Brown) are a traditional Belgian style of beer that are malty, fruity, aged and somewhat sour. The beer is produced through the blending of a young and an aged (at least 1 year) beer which adds smoothness and complexity and balances out any harsh sour character. Oud Bruin can be used as a base for fruit-flavored beers such as kriek (cheeries) or frambozen (raspberries).

This beer takes an aged old beer and young beer and blends them together before further aging them for 6 months in oak barrels. The style is maltier in character than a Flanders Red Ale and less acetic. Historically this style was more sour than commercial examples today and traces its origins back to the Liefman brewery in the 1600s. Historically brewed as a “provision beer” that would develop some sourness as it aged. While Flanders Red Beers are aged in oak, Oud Bruins are typically warm aged in stainless steel. I’m curious, time to give this beer a try.

Appearance – Pours a hazy reddish brown with an effervescent head that is gone quickly.
Smell – Smell is of malt, oak, red fruit, and apples. It has an almost wine character to it.
Taste – Moderate sweetness up front with a crisp tartness. The oak notes come through subtly here as does the green apple and red fruit. The crisp tartness of this beer is refreshing.
Mouth feel – Medium-light body with an effervescent carbonation and a tart crisp finish.
Overall – Nice beer. Given this beer was aged in Oak barrels, a lot of notes were similar to Flanders Red Ales I’ve had. Given the name of this beer “Hip Hops” I had expected there to be some more hop aroma/bitterness in this beer. Whatever hop notes there may have been were overpowered.
Do I like it? – I did. What’s interesting in researching this style is that Oud Bruins are normally aged in stainless steel. Given this was aged in oak, similar to a Flanders Red Ale, I found some of the characteristics to be similar to that style more than an Oud Bruin. Still, it was tasty and I rather enjoyed it.