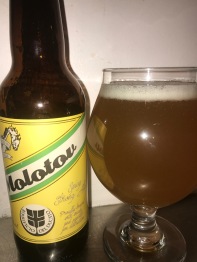 Sunday funday. It’s a pretty cold one out there today and, it’s the last week of the advent calendar. Pretty darn sad that once again we are winding our way down to the end. It’s always a really nice treat to have these beers each day. Luckily, I’ve recruited my brother-in-law from Calgary to bring me some treats when he comes for the holidays. So, even though the calendar will be done, I’ll hopefully have some fun beers to try.

Today’s beer comes to us from another repeat brewery, Birrifico Del Ducato and it is a Spicy Strong Ale called Molotov.

Italy is not typically thought of for its beers.  As one of the most prolific wine producers in the world it is understandable why.  I had the opportunity to visit Italy last summer and found that there are quite a number of craft breweries around the country.  I tried all the ones I came across and was rather impressed.  I told my wife that I was likely one of the few people who is in Italy and seeks out craft beer.

Birrifico Del Ducato is located in a small village called Roncole Verdi which is located in the Parma region of Italy. Parma is famous for its “parma ham” (prosciutto) as well as fizzy wines such as Lambrusco and Malvasia. Roncole Verdi is also the birthplace of composer Giuseppe Verdi from which this brewery draws some inspiration.

The brewery is run by Giovanni Campari, brewmaster, and Manuel Piccoli, entrepreneurial mind.  They harvest their ingredients as often as possible by visiting the farms and selecting the hops, malts and barleys that they will use in their beers. The produce a number of beers all year round as well as seasonal beers released only at specific times of year.

The style we have today is a Strong Ale brewed with Wasabi. I had a challenging time determining exactly what style of beer was used as the base for this. It would be classified as an Herb/Spice/Vegetable beer. While a lot of the characteristics depend on the base, this is a catch all category for beers that use additions like spices, pumpkin, etc.… With a name like Strong Ale it is likely brewed in the style of either a Belgian Strong Ale or an English Strong Ale. It’ll be interesting to see.

It’s the wasabi that gives this beer the spice to call it spicy. It’s also what’s behind the name, Molotov. Wasabi is likely known to any sushi lovers as that green paste that comes with your meal. It’s hot, but a different kind of hot. It’s a Japanese horseradish and is pretty good at clearing your sinuses. I’m interested to see how it fits with this style of beer.

Appearance – Pours a hazy golden yellow with a good 1” white head and effervescent carbonation.
Smell – Smells of biscuit malt, toffee and a bit of wasabi in the back of the nose.
Taste – Sweet right up front with notes of caramel and chocolate. There is a slightly metallic twinge before the wasabi note comes on the finish. Wasabi is subtle and just noticeable on the back of the tongue.
Mouth feel – Medium body with medium carbonation and effervescent bubbles.
Overall – Falls a little short. The flavor of the wasabi is so subdued by the sweetness of the malt that it’s almost unnoticeable. While the beer is pleasant and the sweetness with the slight wasabi isn’t unpleasant, the beer comes across more as a middle of the road golden ale.
Do I like it? – I found this beer to be a bit “meh”. While it was good and I didn’t find myself thinking it was unpleasant, the wasabi really didn’t come across for me and it left me a bit disappointed. With a label that says “brewed with wasabi and an appetite for destruction” I had higher hopes. Still, it wasn’t bad, just slightly disappointing.