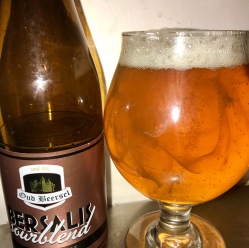 I can’t believe how close we are getting to the end of the calendar. It seems like just yesterday I was cracking open the first square and beginning this path. Now, more than half-way through, we are 10 days from the end and 11 from Christmas day (for those who celebrate).

Day 14 brings us a beer from Oud Beersel (another repeat brewery)called “Bersalis Sourblend”. This is a blend of a traditional Lambic and a Belgian blonde that has been aged in barrels. It sounds delicious and I’m excited to try it.

The brewery, Oud Beersel, was founded in 1882 and is located in Beersel, 10km away from Brussels city centre in the southwest of the city. This brewery is one of the last remaining authentic lambic breweries and is well known for its lambic beers and its traditional brewing methods.

The brewery almost shut down at the end of 2002 as there was a lack of succession planning on behalf of the family who ran the brewery. There was a public shock at the potential loss of a historical, cultural and traditional brewery and in 2005 the brewery was taken over and brewing began once more. The reason, to protect the time-honoured tradition of lambic beers as well as the historical and cultural heritage of the brewery. Pretty awesome to see. They have a storied history, outlined here.

Lambics are a style of beer that has traditionally been brewed in Belgium. These beers are brewed using spontaneous fermentation, using microflora from the air rather than harvested brewers yeast. Lambic matures up to three years in wooden barrels, whereupon it is blended to make Oude Geuze. Sour cherries undergo fermentation in lambic beer and after a second fermentation in the bottle Oude Kriek is born. This unique brewing process with spontaneous fermentation is possible in Belgium in the Pajottenland region, the Zenne Valley and in Brussels, because of the presence of a specific microflora.

As for a Blonde, we’ve seen on of these before. They are moderate strength golden ales with a mild fruit and spice note from the Belgian yeast with a slightly sweet malty flavour and a dry finish. These are a relatively recent beer style that was made to further appeal to European Pilsner drinkers and has become much more popular.  These beers are similar in strength as a Dubbel, similar character as a Belgian Strong Golden Ale or Tripel, although a bit sweeter and not as bitter.

Appearance – Pours a hazy pale gold with a good 2” rocky head.
Smell – Smells of pear, apples, yeast funk and bready malt.
Taste – Starts sweet with a slightly metallic tartness. This brings in hints of fruit, citrus and funk. Finishes moderately bitter with a good crisp tartness.
Mouth feel – Medium-light body with a good carbonation and a nice tart finish.
Overall – The strong ale blended with the lambic is overpowering in what it brings. The lambic notes are subdued. While the beer presents notes of the blended styles, neither is the star and so it falls a bit flat.
Do I like it? – I did like. While there was some things I found a bit off-putting, the metallic note to be one, I enjoyed the beer overall.