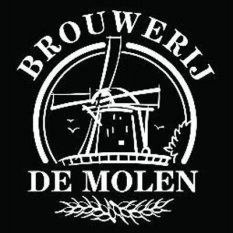 Today’s beer comes to us from the Brouwerij de Molen in the Netherlands.  It is a Winter Saison aptly named “Winter Saison”.  In the 2014 advent calendar, we had the chance to try their Winter Porter, take a read about that one here. The breweries name means “The Mill” and is located inside a historic windmill building called De Arkdulf, which was built in 1697.  As well as a brewery, they also have a retail business on site and a restaurant which creates food to pair with their beers.

Founded in 2004 by head brewer Menno Olivier, this brewery can produce 500 litres per batch with an annual production of 500 hectolitres.  The equipment at the brewery includes converted dairy tanks which are used as fermenters and the bottles are still capped and corked by hand.  Today the brewery can produce 2500 litres at a time and has an annual production of 6000 hectolitres due to the purchase of a new building 200 meters away from the mill.  One interesting thing about this brewery is that they do not dispose of unsatisfactory beer.  Instead, this beer is distilled into a “beer liqueur” at 20% abv and is then sold as well, reducing the spoilage of the beer, and allowing them to still make profit off bad batches.

Saison’s are a sturdy farmhouse style of beer.  Originally brewed in Wallonia, the French speaking part of Belgium, it was a beer brewed at the end of the cool season to last through the warmer months before refrigeration was common.  It had to be sturdy enough to be able to last but also not too strong so it would quench your thirst in the summer months.   This style of beer is very complex with a lot fruit notes, spices, and earth yeast notes to the beer.    They tend to combine nice fruity notes with spice and a subtle sourness or tartness.  Usually lots of spice with mild bitterness and a dry crisp finish and only a hint of sweetness.

At one point in time Saison’s were an almost extinct beer style but they have seen a great resurgence and are commonly brewed by several craft breweries across Canada.  This saison is described as being “saisonish” and has a few interesting additions to make it more suitable for winter. Giving it a bit of heat to warm you up are some Szechuan peppers. The brewers also added some mustard seed and juniper berries which will give it an interesting flavour as well. I’m interested to see how these flavours go with the typical saison style. Let’s see.

Appearance – Pours amber with a 1” head and some bits of sediment, likely from being bottle conditioned.
Smell – Smells of cracked pepper, subtle pear, some yeast funk and a little bit of spice on the nose.
Taste – Tastes a little sweet on front with some of that subtle pear coming through. As you swallow it begins to shift to a bit of a that cracked pepper and then finishing with some heat from the Szechuan peppers.
Mouth feel – Light-medium bodied, medium carbonation and some spice on finish.
Overall – I can see why this is saisonish. It’s a bit a of a fuller body and not quite as crisp or refreshing as some other saisons I’ve had. It certainly has some of those nice fruity notes, though a bit toned down, and a good helping of spice. There are certainly some saison components, but there are some things that don’t fit as well.
Do I like it? – I found this beer to be interesting. The sweetness and fruit notes combined with the pepper and spice on finish made for a flavour experience. I’ve had beers with hot peppers before, this one hit the mark of having it be just a subtle note on the finish. Overall, I did enjoy it.