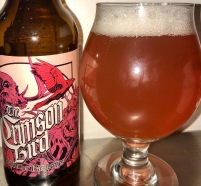 Man it’s snowy out there again today. Yesterday and today have been difficult driving. I’ve got to say it’s been rough. Before I get into today’s beer I want to mention that Torque’s taproom officially opened today. So, that means you can pop in, enjoy their beers and snacks right on site. I’ll also mention that Half Pints has a really neat sounding event coming up on December 21st. They are doing a 12 beers of Christmas at their taproom. So, add this to your calendar. I’d also suggest you take a look at their new untapped profile as it provides an up to date list of the beers available and upcoming events. Check it out here.

Onto today’s beer. Day 7 comes to us from Napabier, a microbrewery located in Noain, Spain. The beer, The Crimson Bird, is a saison made with raspberries. One thing I will say right off the top about this brewery is that they have fantastic artwork. Check the awesomeness of the art here.

Naparbier was founded in 2009 and was originally located in Pamplona, Navarra, Spain. Not necessarily as well known for beer as it is for Bull Fighting or Hemingway, Naparbier was looking to change that. The name is a combination of the Basque word for Navarra (Napar) and the German name for beer (bier, of course).

Originally they started with just two beers — a pilsner and a dunkel — and now have a range of 14, five of which are year-round.

These guys are focused on freshness and creativity. With the exception of something like an imperial stout, their beers shouldn’t be aged. Head Brewer Juan Rodriguez is passionate and innovative, exploring both classic styles and more out-there endeavors. One such endeavor is the Pumpkin Tzar Russian Imperial Stout, brewed with pumpkin and habañero chile. They also recently launched a new range of “avant-garde” beers that the brewer calls “a little bit different” from what they usually brew, including a Belgian dubbel and a barley wine aged in whisky barrels. You can see all of their beers here.

Naparbier has been growing in reputation over the years and some of their brews have included collaborations with the likes of Evil Twin Brewing. They’ve also made an impression on the folks at Brew Dogs who specially brought in these beers for a £30 a person dinner and beer tasting. The beer we have today is one they’ve done with both Strawberries and Raspberries and I’m pretty excited to give it a try.

Saison’s are a sturdy farmhouse style of beer.  Originally brewed in Wallonia, the French speaking part of Belgium, it was a beer brewed at the end of the cool season to last through the warmer months before refrigeration was common.  It had to be sturdy enough to be able to last but also not too strong so it would quench your thirst in the summer months.   This style of beer is very complex with a lot fruit notes, spices, and earth yeast notes to the beer.    They tend to combine nice fruity notes with spice and a subtle sourness or tartness.  Usually lots of spice with mild bitterness and a dry crisp finish and only a hint of sweetness.

At one point in time Saison’s were an almost extinct beer style but they have seen a great resurgence and are commonly brewed by a number of craft breweries across Canada.  We are seeing them pop-up more and more here in Manitoba and it’s a style of beer that I really enjoy drinking. Let’s see how this one tastes.

Appearance – Pour slight rose amber colour with a good 4” head that fades slowly to a retained 1” head.
Smell – Smells of raspberries with a tartness on the nose. Some funk comes through from the yeast as well as some subtle citrus notes.
Taste – Raspberries with some moderate tartness and a good sweetness to balance it out. Some subtle almost peppery spice and yeast funkiness is noticeable on the end.
Mouth feel – Medium-light body with a good carbonation and slightly tart/funky finish.
Overall – The raspberry and tartness from that fruit are at the forefront. The funkiness from the yeast is there but not as prominent. Overall a good beer.
Do I like it? – I did very much like it. I think the balance of tartness with sweetness and a subtle funkiness was great. It was a refreshing beer and very drinkable. I’d be happy drinking more of it.