I’m pretty happy that some of the beers I grew up enjoying are making their way here to Manitoba. One such brewery is Garrison.  They’ve been around since before I could drink, and I know that they were a go to beer at many local pubs.  They have certainly grown, as have my tastes, and now they produce a wide range of beers.  Today I’m going to review their Ol’ Fog Burner Barleywine.

Garrison Brewing is located in the largest maritime city, Halifax.  The name comes from the fact that this one was of the major garrison sites for the protection of Canada being the largest eastern port.  As well, Halifax has a long history of brewing with William Steel opening shop as the first brewer in 1754 in order to serve the early settlers and troops who were stationed at Citadel Hill.  By prohibition, Halifax was home to some 20 brewing operations!

Garrison itself tries to follow this concept of independent micro-brewing and set this at their heart when they opened in 1997 with their first brew “Irish Red Ale”.  They have continued to produce and grow serving hand-crafted ales that use the best ingredients available.

After 15 years in business, in 2013 they expanded to develop over 13,000 square feet of industrial space to become their new home. Their setup is made up of tanks and equipment that were designed and fabricated in Charlottetown, PEI (keeping it local, very nice) and consists of a single-step infusion mash tun and a propane-fired kettle and whirlpool.  It takes them an average of 10 days start to finish to ferment and condition.  You can read all about their brewing process here.

This beer is brewed in the style of an English Barleywine.  A very strong, heavily malted beer.  This style is really a showcase of malty richness with a warming alcohol and often pleasant hoppy or fruity notes. This beer can be aged and when done so it can often take on port like flavours.

While there have been strong ales of various different formulations for a long time in England, the modern Barleywine can be traced back to Bass no. 1 in 1872.  This was the first to be called a “Barleywine”.  Traditional a darker style of beer, in 1951 a brewer called Tennant (now Whitbread) produced “Gold Label” a gold coloured Barleywine. 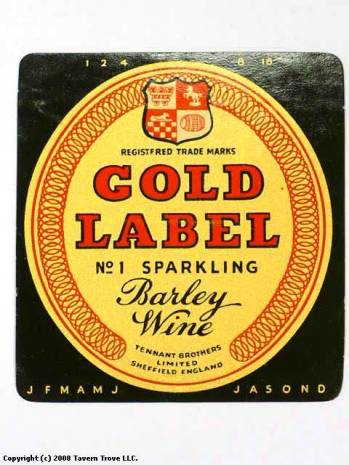 These beers are quite often the strongest ale offered by a brewery and now typically are stamped with a vintage date as they have become popular cellaring beers.  This style will age well and often changes in flavour profile.  The English Barleywine is the original style of this beer that has spawned off into other styles from Belgium, the US and elsewhere.

As always, read more about the style in the BJCP style guide found here.

Appearance:  Beautiful tawny/caramel in colour with a good 2” head that just won’t quit.

Smell: A beautiful array of smells come from this complex beer. Caramel, molasses, cognac, raisins, alcohol warming, biscuit/yeasty notes, toffee and some resinous notes as well. The aroma is pleasant and rich.

Taste: This beer has a soft start that moves towards a huge hit of malt, rum and cognac. The warming from the alcohol in this is really pleasant.  The toffee and caramel sweetness is certainly there along with some subtle spices like cinnamon or black pepper. There are some slight fruity notes as well as a nice bitterness that on the finish.

Overall: Really impressed with this beer. I expect a lot of complex flavours in a barleywine given the huge amount of malt and complexity available to the style. This beer does not disappoint and brings a huge array of different aromas and flavours to the table. Overall this beer is very well balanced and with the high alcohol content that can be a bit dangerous.

Do I like it: Once again, I am impressed with Garrison.  This beer brings so much in the way of flavour and aroma.  I am certainly going to be aging one of this to see how it tastes next year. Beautifully rich and balanced, well worth it.

I’m pretty excited as I will be heading to the Maritimes this summer to visit family. That’ll mean a visit to a number of new breweries as well as old. I’m going to certainly make the trip to Halifax to visit Garrison, and I can’t wait.