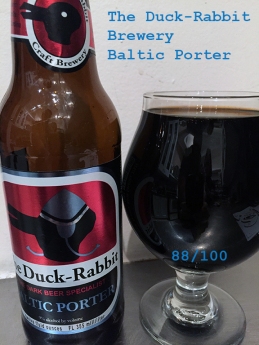 We have arrived at Day 16 of the advent calendar.  Not too many left to go before we arrive at the last. I am also getting close to my trip and I am getting pretty psyched. I’ve already been exploring the best beer spots and prepping my trip to allow for some beer time.  It was a good day yesterday, despite the beer not really being my favorite, I’m optimistic for today.

Today we have a beer from The Duck-Rabbit Brewery (yes I love the name too) and it is a Baltic Porter.

Located in Farmville, North Carolina, is a brewery.  It has an interesting name and makes interesting beers.  The Duck-Rabbit Brewery was founded by Paul Philippon and sold its first beer in 2004.  It was a long journey to arrive at this point for Paul.  Pursuing a career teaching Philosophy, Paul first got he idea to open his brewery in 1987.  After working over the next number of years at three different breweries, he was finally able to open his own.  In 2004, Duck Rabbit Brewery sold its first beer and has continued to grow since.

Paul came up with the logo for the brewery using his experience as a philosophy teacher.  The image is one of those which when viewed from a different perspective looks like more than one thing.  Like the old lady and young lady picture, this logo is based off one which looks like both a rabbit and a duck, depending on how you look at it.  Hence the name, and the logo.

The Duck-Rabbit brewery team includes a number of folks helping out with the various tasks. The brewery uses a 20-barrel brew house and brews into 20, 40, 60 and 80 barrel tanks.  The focus of the brewery is not on brewing a wide variety of beer styles, but focusing on being the “dark beer experts”.  For them, the dark styles of beer are under represented in the marketplace.  Given the enormous flavour and style possibilities in brewing the darker styles of beer, they hope to be able to make something that will suit the tastes of every beer fan.

Today we have from them a Baltic Porter.  Now, as I discussed on day 2 of this blog, porters and stouts are not really historically different beers.  While we do have beers sold under both names, stouts traditionally were stronger versions of porters.  The Baltic Porter is a prime example of this historical nature, though, it is still quite strong in an of itself.  The Baltic Porter is in fact a version of the Russian Imperial Stout which originated in the Baltic region of the world.  What makes this different is that it is usually cold fermented, similar to a lager.  With the export of Britain’s Russian imperial stouts being quite popular in the Baltic region, it was only a matter of time before they decided to make their own using their own ingredients and brewing styles.

A Baltic porter often has the malt flavours similar to an English Brown porter but with less of the roast on the malt, like a schwarzbier.  Overall, typical of this style is a sweet malt combined with deep malt, dried fruit esters and alcohol.  Smooth roasted malt flavours coming close to burnt with a clean lager characteristic.  An interesting style that I’ve not had the opportunity to enjoy too often. So, I am looking forward to this one.

Appearance:  Deep dark brown, almost black in colour. A good amount of head that fades really quickly.
Smell: Chocolate, toffee, plums, currant, date and roasted malt.
Taste:  really nice sweetness from the malt as well as some good bitterness thrown in there as well. The roasted malts come through really nicely along with those chocolate and dark fruit notes. There is a lightness to this beer as well and it is incredibly smooth.
Mouthfeel: Full bodied, lighter than a Russian imperial stout, soft carbonation, good warming finish from the alcohol. Smooth drinking.
Overall: Sweetness is not overwhelming, really well balanced, great depth of flavours with the roasted malts bringing in chocolate and toffee and then the dark fruit notes coming in on the back to just add even more to it. Alcohol is present, but not noticeable on taste, just there to warm the cockles of your heart.
Do I like it: Oh yes.  So far this is my second favourite from the Calendar.  It has a lot of those same positive points from the Boris the spider, but with a slightly lighter body.  Overall, this one is really strong and really worth drinking. I’d have this one again any time.