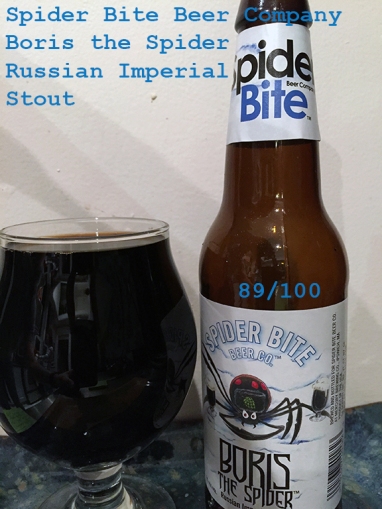 Yesterday was a pretty decent turn around in respect to beer.  While it was not my favourite, it was okay and that’s a big jump from day 6.  Today, as usual, I got up early and went into grab the now individually wrapped day 8 beer from my spare bedroom (away from cats who might knock it over). Given that the advent calendar beers tend to sit for a little while before actually being opened, I was hoping that I might something that actually can age well.  Today’s beer is just that.

Today we have Spider Bite Beer Company’s Boris the Spider Russian Imperial Stout.  Spider bite is located in Holbrook, Long Island and distributes its beer primarily between Long Island and New York.  Spider Bite Beer Company was conceived by founders and friends Larry Goldstein and Anthony LiCausi back in 2008.   Larry was born and raised on Long Island, but after getting biology degree he decided to move to Atlanta to study Chiropractic medicine.  It was during his time in Atlanta that Larry discovered a love and passion for craft beer.  He began home brewing, entering competitions, writing tasting articles for a local paper and then began assistant brewing at a local brewpub.  After more than a decade as a Chiropractor he moved his family back to his hometown of Nesconset, NY.  Larry attended the American brewers’ guild to receive a formal brewing education followed by an apprenticeship at Lost Abbey/Port Brewing in San Diego.  It was here he fell in love with many of the styles he brought over to Spider Bite when it opened in 2008. You can listen to the guys talk about there beer and the brewery here.

Spider bite has a number of different spider themed beers.  Check them out.  I am pretty excited about today’s beer.  Russian Imperial Stouts are a style that I’ve really started to enjoy and appreciate.  These beers age incredibly well and change over time.  This style of beer was originally brewed in the 1800s by Thrale’s brewery in London England for export to the court of Catherine II of Russia. This same beer is brewed today now under the Courage brewery name and is called Courage Russian Imperial Stout (RIS).   Ranging between 8%-12% alcohol with strong malt notes of coffee, caramel, chocolate and dark fruit (plums, prunes or raisins for example), it is a perfect beer for a winter night.

Like I said I have become a pretty big fan of this style and have learned to appreciate the deep rich complexity of these beers.  I think this is one of those styles that takes a little bit of getting used to and I certainly didn’t appreciate these beers last year as much as I do now.  Without anything further, let’s get to tasting this beer.

Appearance:  Pour incredibly dark, like a black hole absorbing all light around it.  Very minimal head which is to be expected with this style.
Smell: Rich coffee smells, smoke, chocolate and black licorice.
Taste: The smoke notes are evident on the start which fades into a chocolate malty sweetness finishing with a rich coffee aftertaste. Almost like a smoky chocolate mocha.
Mouthfeel: Low carbonation but full rich body, silky smooth with a slightly sharp finish.
Overall: Overall a very deep and layered imperial stout. There is a lot going on with this beer.  The richness of this and ability to hide the alcohol content with a nice warm lingering after the finish makes it a really delicious Russian imperial stout.
Do I like it: Absolutely. I really like this one.  As I said I am a big fan of Russian imperial stouts and this one lives up to my expectation. The rich flavours balanced eminitley and smooth make this a great beer to sip on a cold winter’s night.  This certainly is not a gulping beer, that wouldn’t do it justice, it’s a beer to savor.