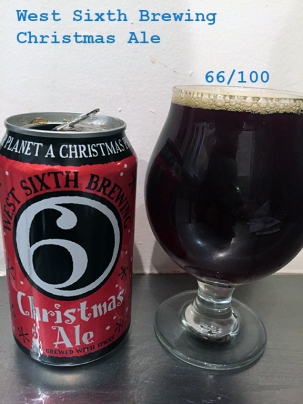 Well, for those of you who have been reading regularly, you’d be aware that today I defended my Master’s Thesis.  It was quite a nerve wracking experience up until it started and then things went as smoothly as I could have hoped.  So, if you’re at all interested, I was successful and I have officially passed the thesis component of my Master’s program.  I’m pretty thrilled.

Back to business.  The beer we have today comes to use from West Sixth Brewing in Lexington Kentucky and it is a Christmas Ale.

West Sixth Brewing was founded by four friends who all felt that Lexington, KY needed more high quality local beer.  So, with their diverse sets of talents and skills, Ben, Brady, Joe and Robin all came together to create not only beer for the craft aficionado, but also beer you could drink after a bike ride.

With this in mind, West Sixth Brewing produces a number of different beers with a focus on quality ingredients, hand crafting, and working hard to make sure every beer that goes out the door is just as delicious as the last.  West Sixth produces four flagship beers as well as various seasonal beers.  The beer we are having today is one of their seasonal brews.

They also have a strong community focus.  Since the beginning part of the model for West Sixth has been to have a positive impact on the community in which they live. They do this in a number of ways.  The most simplistic way is by contributing money back to charities.  They have so far committed to contributing 6% of their net profits back to various charities every year. They also hold special “Sixth for a Cause” nights at their brewery allowing non-profits to come in and use the space and setup all kinds of things in their tap room.  From this they contribute 6% of their sales that night to the non-profit as well as whatever is donated directly to them through whatever activities they’ve setup.

Now, Christmas beers come in all shapes and sizes.  This style typically refers to beers consumed at Christmas time that are generally spiced with seasonal spices such as cinnamon, nutmeg or ginger.  These beers also tend to be higher on the ABV ranger and can often use odd or interesting ingredients.  These beers don’t have a specific style necessarily.  Already we’ve had a Christmas beer that was in the style of a Belgian Dark.  Fort Garry’s “Naught and Spiced” could be considered a Christmas beer and is made using a porter base.  This specific beer we have today is called an ale.  The brewery itself, which is something I love, gives the exact malts, spices, yeast and hops used in the production of this beer.

Based on this, it has some Belgian components in the use of Abbey Malts and Belgian dark beet syrup, as well as the Christmas spices (ginger, cinnamon and nutmeg) along with some traditionally used in a wit (cardamom, clove and orange peel.)   At 9 ABV and with a good range of spices and malts, I’m interested to see how it tastes.

Appearance:  Dark Amber Brown with very solid head that fades quickly after pouring
Smell: Smells of clove, cinnamon, nutmeg and roasted malt. The smell on this is fantastic and really does smell like Christmas.
Taste:  I’m feeling as thought something may be off with my beer.  The spices come through but there are some serious off flavours in this one.  In reviewing other comments on the advent calendar beer, I’ve come to conclude that whatever I got is not quite as strong as the others for some reason.  I had a hard time drinking this beer and really, the taste was unappealing and very off putting.  It may just be me.
Mouthfeel: Good carbonation, medium body, bitter finish.
Overall: I’ve never pretended to be a beer tasting expert and have always stated that my tastings are my own opinion of the beer to help me know which I like best.  This is a situation where some may like this beer but I found, overall, it was very off putting and I ended up not being able to finish it.  The spices tasted off, there was a weird metallic aftertaste that really was not nice and it simply did not taste good.
Do I like it: No.  I’m not suggesting that this beer is bad. In fact all other comments I’ve read suggest the opposite.  For me, and in this particular situation, it tasted bad and was really off putting.  As always, I suggest people try beers they think sound interesting and make up their own minds. For my particular can, it was not good.